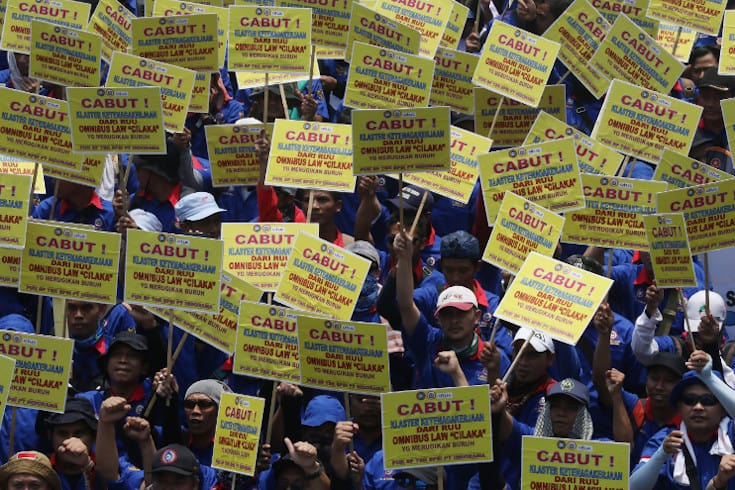 The Omnibus Law Cipta Karya Bill designed by the government is seen as threatening press freedom and the government’s efforts to interfere in the press. This is after the government included a revision of a number of articles in Law Number 40 of 1999 concerning the Press.

“By reading the Work Copyright Bill, in which there is a proposed revision so that there are government regulations governing the imposition of administrative sanctions, it is a form of setback for press freedom,” Ade said, Sunday (16/2).

According to Ade, the government is trying to create a ‘back door’ mechanism or a ‘rat road’ to interfere with press affairs. It is feared that bad things like the New Order will reoccur, when the government used the pretext of administrative problems to curb the press.

“This intention to intervene again can be seen in the Omnibus Law Employment Creation that will make government regulations concerning the imposition of administrative sanctions against media companies that are considered to violate article 9 and article 12,” he said.

Article 9 contains provisions regarding press companies must be in the form of Indonesian legal entities. Article 12 regulates the issue of a press company that must publicly announce its name, address, and person in charge.

“We ask that the revision of this article be revoked,” said Ade.

The government’s decision to increase financial penalties for press companies has also been rejected by a number of press people. Ade said, in his proposal, the government submitted a revision of the fine sanction for press companies that violated the provisions of Article 5 paragraph (1) and paragraph (2), as well as Article 13, to a maximum of Rp 2 billion – up from Rp 500 million previously.

With such a large amount of fines, it is considered that his spirit is more nuanced in revenge. In addition, the existence of sanctions of that size can also be used as a new tool to intimidate the press.

LBH Pers, AJI, PWI, IJTI also demanded the government’s consistency in implementing the Press Law. According to him the law has so far been deemed sufficient to protect press freedom as long as it is implemented consistently.

Raising sanctions for those who violate articles 4, paragraphs 2 and 3 is not a solution to enforce the Press Law. However, more important is how consistency in its implementation.

Ade said, if law enforcement officials want to protect press freedom, then the sentence should be used using the Press Law which has more severe sanctions, which can be subject to two years in prison or a fine of Rp. 500 million. However, if sanctions that have existed so far are rarely used, he questions the proposed revision of the article.

“We capture the impression of the government as running lip service politics, imaging, to impressively protect press freedom, by raising this type of sanction. For us, far more substantive what the government can do is consistency in the implementation of law enforcement Press Laws,” he said.