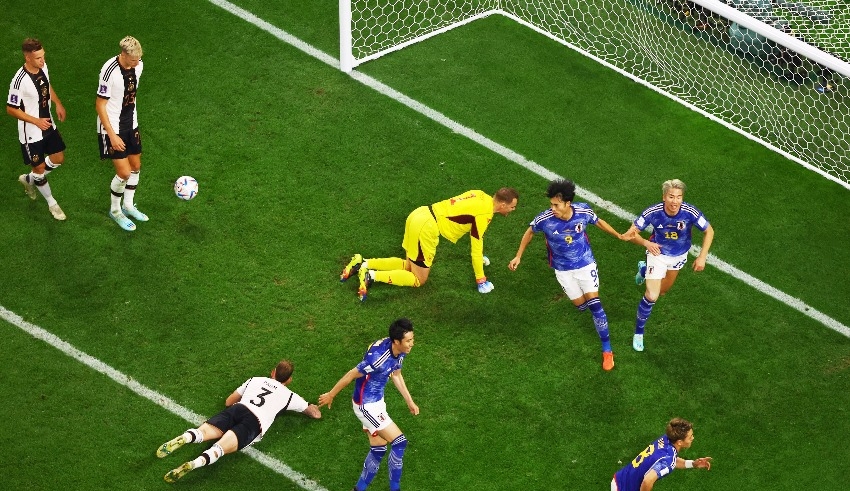 Germany in control of the match, but missed opportunities opened the door for Japan, who showed little offensive effort until replacements in the second half
(c) South China Morning Post

Ritsu Doan and Takuma Asano scored late goals to give Japan a 2-1 victory over Germany in the World Cup on Wednesday, November 23. The four-time champions appeared to be cruising to victory thanks to an Ilkay Guendogan penalty, but they paid the price for missing opportunities.

It was a replay of their 2018 World Cup nightmare when, as defending champions, they lost their opening match against Mexico and, following another loss to South Korea, were eliminated from the tournament in an unprecedented manner.

Germany appeared to be in complete control of the Group E match, but each squandered opportunity opened the door for Japan, who showed almost no forward intent until a series of substitutions injected some vigor in the second half.

Doan equalized in the 75th minute before Asano displayed excellent control and scored the game-winning goal from a tight angle, causing the Japan bench to erupt in jubilation.

As Japan failed to gain a foothold during the most of the match, this turnaround appeared improbable.

Joshua Kimmich picked out David Raum in acres of space inside the box, and goalkeeper Shuichi Gonda clumsily brought him down as he turned in the 33rd minute, with Ilkay Guendogan converting the penalty.

Kai Havertz thought he had scored a second goal in first-half stoppage time, but VAR disallowed it because he was a meter offside. The assistant referee was virtually the only person in the Khalifa International Stadium not to notice.

Jamal Musiala missed a shot after a penetrating run, and Guendogan clipped the post in the early stages of the second half.

Then, Gonda produced four consecutive saves to deny Jonas Hofmann and Serge Gnabry, keeping his team in the game.

Manuel Neuer, in his fourth World Cup appearance, was also quick to save from Hiroki Sakai and did well again shortly after to block from Takumi Minamino, only for substitute Doan to smash in the loose ball.

Suddenly buoyed, Japan pressed forward, and Asano displayed tremendous strength to collect a high free kick and hold off defender Nico Schlotterbeck, as well as incredible technique to hammer the ball into the smallest of spaces.

Germany attempted an all-out attack thereafter, to no avail, and now face Spain in a possible must-win match.

Japan meets Costa Rica next and is already imagining a spot in the final 16.