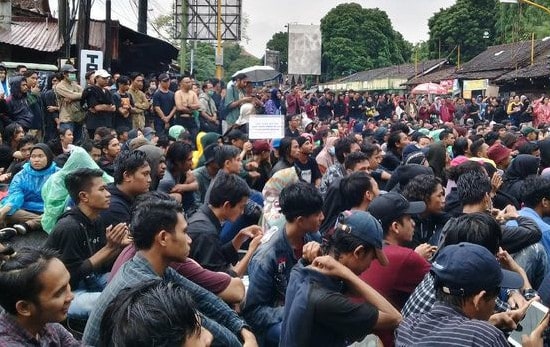 Waves of rejection of the Omnibus Law on Job Creation bill still continue. In fact, the union gave an ultimatum if President Joko “Jokowi” Widodo continued to force the ratification of the bill.

This time, as many as 2 million workers were claimed to be holding a mass strike, which part of three major labor unions in Indonesia. This number will continue to grow if other unions joining.

The Indonesian Workers Welfare Union Confederation (KSBSI) President Elly Rosita Silaban said that the Indonesian Labor Workers’ Assembly (MPBI) provided around two million workers. The number is spread in 300 districts / cities in 30 provinces. Other unions said that if they want to join, members can look for 1 million people.

“Approximately two million for KSPSI, KSPI, and KSBSI. The other unions are combined with around one million,” Elly said, Thursday (12/3).

The same thing was also conveyed by the Chairperson of the Confederation of the Congress of the Indonesian Trade Union Alliance (KASBI) Nining Elitos, a strike will be carried out by the KASBI Confederation which accommodates 130,875 workers.

“Our actions carried out in various regions also lead to preparation for a joint general strike,” Nining said, Wednesday (12/3).

“Do not because of greed, forcing workers to fight hard. But we will not choose that path (mass strike) if social dialogue is put forward,” said Iqbal at Sari Pacific Hotel, Jakarta, Wednesday (11/3).

“Therefore, Omnibus Law must be withdrawn, renegotiate with a national tripartite,” said Iqbal who is also the Indonesian Workers ‘Workers’ Assembly (MPBI).

It is known, strike is the right for workers to stop production activities in the company. This right may be exercised if negotiations relating to work fail to reach agreement.

The right to strike is regulated in Law Number 13 of 2003 concerning Manpower. This right is also guaranteed by International Labor Organization Convention (ILO) No. 87 concerning Freedom of Association and Protection of the Right to Organize.

In South Sumatra, around 2,000 workers from the Food and Beverage Tobacco Trade Union Federation (FSB-RTMM) held a long march 3 kilometers away from the court of Benteng Kuto Besak.

According to the Secretary of the FSB-RTMM Nanang Setyawan, more than 20 thousand workers joined the union. It threatened to hold a bigger demonstration if the Omnibus Law was still in force.

“We are holding an action today to reject the Omnibus Law which does not favor workers and threatens our future. If the government and the People’s Representative Council (DPR) still apply [Omnibus Law], a total of 20 thousand workers will take to the streets against the policy,” said Nanang.