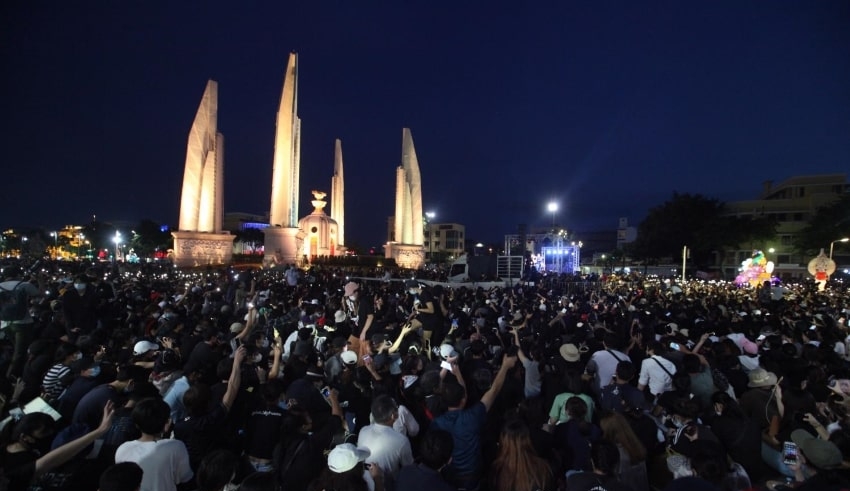 A majority of people agree with the three demands raised by the Free People group.
(C) Bangkok Post

A majority of people agree with the three demands raised by the Free People group, believing they are in line with democratic principles, but some believe the demonstrators should not infringe the monarchy, according to an opinion survey conducted by the University of Suan Dusit Rajabhat or Suan Dusit poll.

On Aug 16-21 the poll was conducted online on 197,029 people across the world. Asked what they think about the students’ ongoing anti-government demonstrations, each respondent being allowed to choose more than one answer

With regard to the request for a ‘constitutional amendment,’ 62,84 percent agreed with it, with some saying that the present constitution is undemocratic and perpetuating dictatorship, and that the provision governing senators should be amended, while others said that only problematic sections should be amended and that the people should participate in the drafting of the new constitution, as the current one is out. A total of 24.84 percent disagreed, saying the current charter is good enough and there are now even more serious concerns like the Covid-19 pandemic and the economic slump; and 12.31 percent had no comment.

On the proposal that Prime Minister Prayut Chan-o-cha should “resign or dissolve parliament,” 53.88 per cent agreed with it, saying that Gen Prayut has failed in his leadership, plaguing the country with economic problems, corruption and nepotism as he is the tyrant and lacks the legitimacy to stay in the position; 38.43 per cent disagreed, saying that Gen Prayut is a decent and fair person who has worked for the country and should be allowed to complete the four-year term after he won the election; and 7.69 per cent had no views.

In fact they were asked regarding their overall views on the current student protests, they were endorsed by 53.71 percent, claiming they exercise fundamental rights with a firm aim to see true democracy; 41.17% disagreed, saying that if the demands are extended to infringe the monarchy, there could be a state of chaos as the nation struggles to control the spread of the Covid-19 and the declining economy; and 5.12% had no comments. Morever, The view for this is quite interesting based on the approved perspective among this free people group.