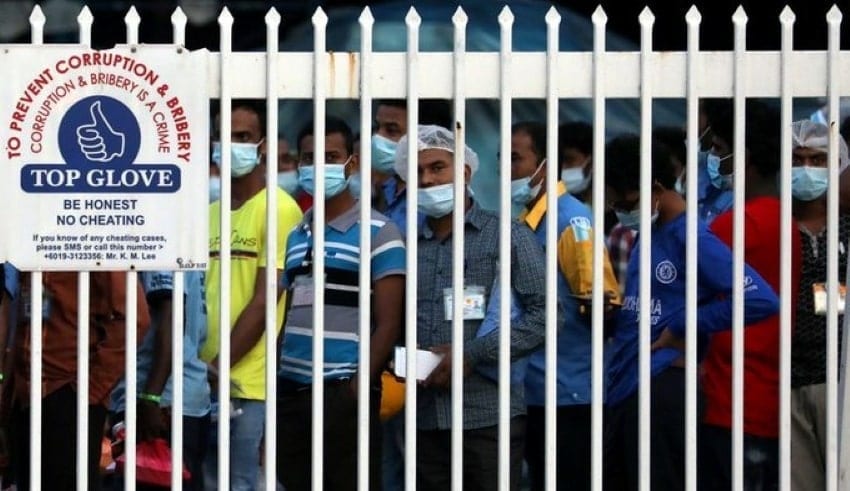 The Top Glove of Malaysia announced that a worker died on Saturday as a result of COVID-19, the first death since the October outbreak in its dormitories and factories.
(C) Yahoo

KUALA LUMPUR: The Top Glove of Malaysia announced that a worker died on Saturday as a result of COVID-19, the first death since the October outbreak in its dormitories and factories.

In an email, the manufacturer told Reuters that the 29-year-old worker from Nepal had been employed for more than two years at its manufacturing facility in Klang, 40 km west of the capital, Kuala Lumpur.

Top Glove’s factory and dormitory complex in Klang has been the largest coronavirus cluster in Malaysia with more than 5,000 infections, about 94 percent of them foreigners, the health ministry of the country said in a statement on Dec 1.

The world's provider of PPE gloves fired whistleblower before the virus outbreak raged through its factories. https://t.co/ZmY9n1Fg7g #malaysia #COVID

Top Glove said on Dec 9 that a total of 5,147 employees tested positive for COVID-19 in its Klang factories.

In all it operates 47 plants, 41 in Malaysia and the rest in Thailand, China and Vietnam. 36 of them manufacture gloves. It has approximately 16,000 factory workers, just over half of them in Klang factories.

On Nov 23, the Malaysian government ordered Top Glove to start shutting down its factories in phases, so that staff could be screened.

Earlier this month, the country’s labor department said it would file charges against Top Glove over its worker housing, which it found to be crowded and poorly ventilated.

On December 7, Top Glove told Reuters in a statement that at the start of the pandemic, it implemented temperature screening and more frequent sanitation of factories, offices, transport vehicles and dormitories, and that it is in the process of improving the accommodation of its employees.