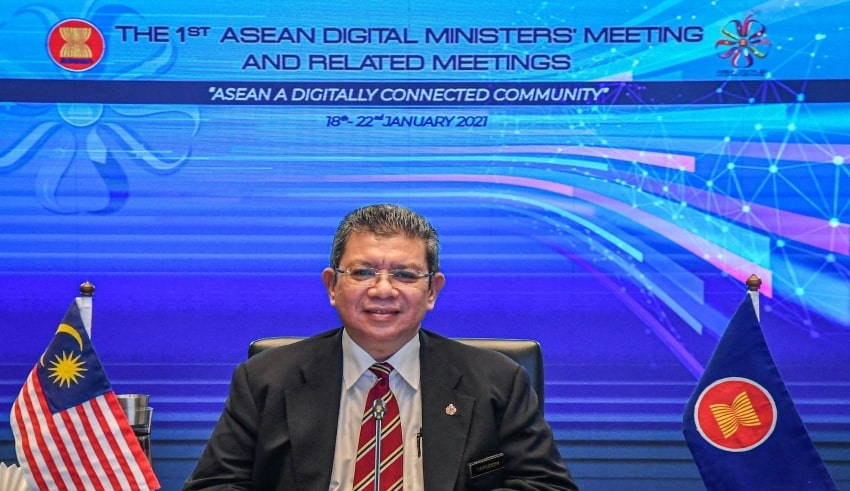 The Ministry of Communications and Multimedia of Malaysia announced on 14 December that its Minister, Saifuddin Abdullah, would chair the first ASEAN Digital Ministers' Meeting.
(C) saifuddinabd / Twitter

Kuala Lumpur – The Ministry of Communications and Multimedia of Malaysia announced on 14 December that its Minister, Saifuddin Abdullah, would chair the first ASEAN Digital Ministers’ Meeting (ADGMIN1) by teleconference from 21-22 January 2021.

The meeting, entitled ‘ASEAN: A Digitally Linked Society,’ aims to deepen cooperation between ASEAN countries to create digital ecosystems as a pillar of the post-COVID-19 development plan.

The importance of centralization and unity in the efforts to grow the ASEAN Community in the areas of cybersecurity, personal data protection, 5G, and the promotion of innovation and e-commerce will be emphasized, according to the ministry.

The meeting also aims to expand cooperation with ASEAN dialogue partners, including Japan, China, the European Union, the United States, the Republic of Korea and India, to reinforce policies in the field of information and communication technology (ICT), to build human capital, to discover and explore new technologies and to boost the ability to resolve cyberspace threats.

Recognizing the importance of confidence in electronic transactions as the primary basis for encouraging the community to accept digital transformation, the Ministry of Malaysia said that the ASEAN Digital Data Governance System has been developed to establish administrative procedures and methods for data transfer between ASEAN countries.

The meeting will also concentrate on improving 5G networks in ASEAN countries through the 5G Ecosystem Implementation Project Policy Recommendations, it added.

The First ASEAN Telecommunications Ministers Meeting (TELMIN) was held on 13-14 July 2001 in Kuala Lumpur, Malaysia. TELMIN took over the technological aspects of the e-ASEAN work programme from the auspices of the ASEAN Economic Ministers.

The Telecommunications and Information Technology Senior Officials Meeting (TELSOM) and its Working Groups carry out the four objectives of the e-ASEAN Framework Agreement, namely to (a) develop, strengthen and enhance the competitiveness of the ICT sector; (b) reduce the digital divide within and amongst ASEAN Member Countries; (c) promote cooperation between the public and private sectors; and (d) develop ASEAN Information Infrastructure.