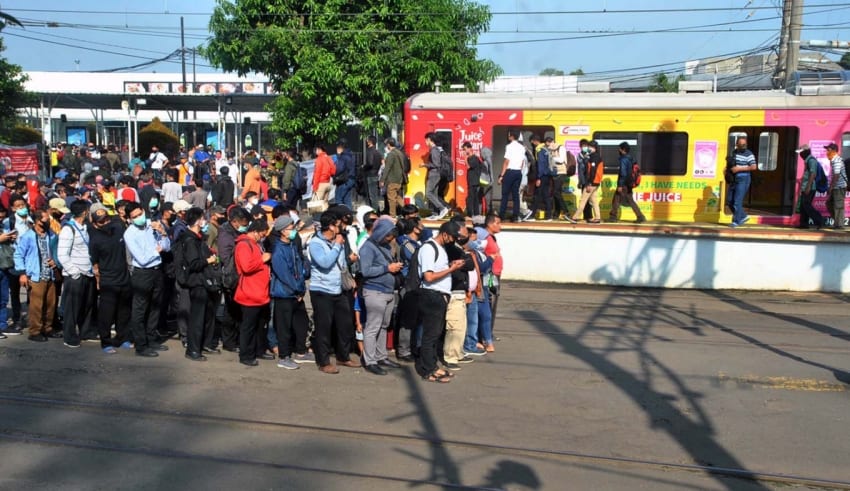 The Commuter Line rail service to continue operating during the large-scale social restrictions (PSBB) in Greater Jakarta (Jabodetabek). This is the decision of the government through Coordinating Maritime Affairs and Investment Minister (Menko Marves) Luhut Binsar Pandjaitan, who is also acting transportation minister despite growing calls from all regional administrations to temporarily halt the service to “flatten the curve” of COVID-19 transmission.

“Minister Luhut has received reports that the majority of commuter train passengers are workers. We don’t want those who work in the health sector affected if its operation is halted,” media spokesman Jodi Mahardi of Luhut’s offic said in a statement on Friday, April 17.

According to Jodi, the office of the coordinating minister is concerned that halting the Commuter Line service that connected Jakarta and its satellite cities will only create new problems.

He added the Commuter Line would still operate, but with a restricted schedule and reduced passenger capacity.

Previously, by imposing the large-scale social restrictions (PSBB) across multiple regions recently, some regional heads have called for the suspension of the Commuter Line. Because the passengers are still crowding Commuter Line stations to travel to the capital for work.

Some cases allegedly that the majority of Bogor residents who tested positive for COVID-19 had contracted the virus aboard the Commuter Line. This was highlighted by Bogor Regent Ade Yasin, also by citing data from the Bogor COVID-19 task force that the “red zones” of COVID-19 transmission in districts such as Cibinong and Bojonggede were located near railway stations.