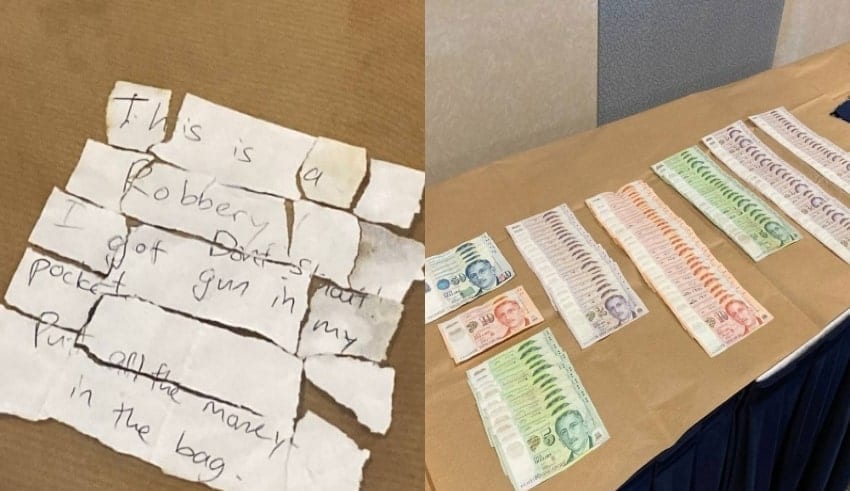 Mahadi Muhamad Mukhtar, 38 years old and an employee from security firm Aetos is currently facing a charge for the unlawful possession of arms or ammunition in the commission of a scheduled offense
(C) mothership

According to court documents submitted, an auxiliary police officer robbed a licensed moneylender which was involved in a similar case from five months ago. The officer was charged yesterday, following his arrest five hours after he tried to escape from the authorities. Mahadi Muhamad Mukhtar, 38 years old and an employee from security firm Aetos is currently facing a charge for the unlawful possession of arms or ammunition in the commission of a scheduled offense. He was found with a model M85 Taurus revolver which he used as he robbed the shop located in Jurong at around 3:30pm on Monday.

This robbery happened after the same shop, OT Credit was robbed by four men who have seized about S$48,000 (RM148,312) just five months ago.

Although the police believed Mahadi to be the sole suspect on the incident in which he took cash amounting to more than S$24,000, the investigation revealed a deposit of the part of the money stolen amounting to S$10,000 into another bank account which belongs to his friend, Nur Shana Mohd Taib. The 34-year-old Taib was charged on Wednesday. She is faced with the charge of dishonestly retaining part of the stolen cash.

There were also other transactions found showing parts of the money being transferred to several bank accounts of unlicensed moneylenders as payment to his debts.

In the event Mahadi is sentenced to be guilty for the unlawful possession of arms or ammunition in the commission of a scheduled offense, he will be facing a life sentence or at least six strokes of the cane. While Shana, could be imprisoned up to five years and could also be fined.

Police officers have been talking with the staff members of the moneylender outfit regarding the safety precautions they can take in case an incident like this were to occur again.

The other shops that are near the robbed moneylending outfit said that they were unaware of the robbery and were worried that it may happen to them next despite the presence of CCTVs in the area.

Sumaiya Sultana who was a customer service officer said that in the first incident of robbery that happened in OT Credit, they heard a lot of screaming that is why they were able to go the area and helped the trapped employee in the room but this time, she said that she heard no noise at all, she didn’t realize anything happening until the police came.