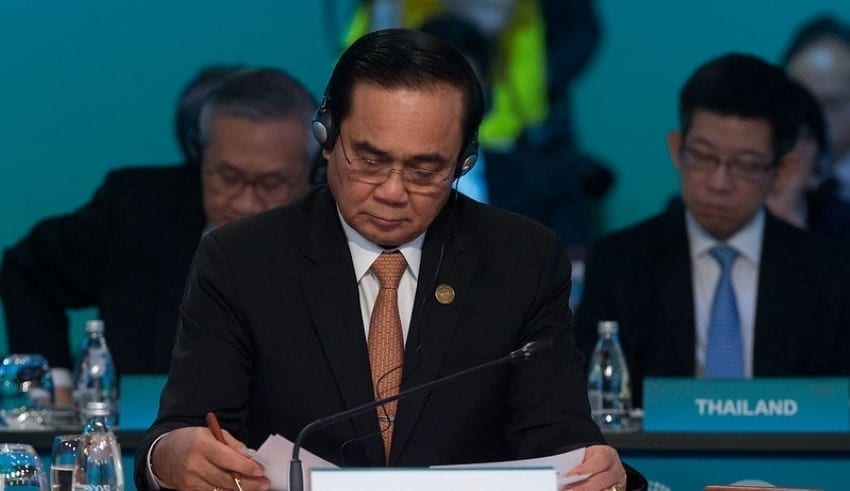 The Opposition leader, Sompong Amornwiwat opened a special parliamentary session with a call for Prime Minister Prayut Chan-o-cha to step down, as anti-government demonstrators prepared an unprecedented petition targeting the German embassy.

The leader of the Pheu Thai Party said Gen Prayut should step down and show responsibility for the mishandling of the demonstrations by using a water cannon against the protesters on Oct 16 and issuing a special emergency decree and end their rally.

As a peace gesture, He called for the release of arrested demonstrators to try to end the standoff. Adding that the prime minister should be open to the demands of the young demonstrators and avoid postponing the process of writing a new constitution.

As the first step to resolving the constitutional crisis, the anti-government movement is demanding the immediate release of jailed activists and the resignation of the prime minister.

MP Paiboon Nititawan of the Palang Pracharath Party defended the prime minister by saying that the country needed his leadership to get through the economic crisis and to protect the monarchy institution that was under attack by protesters.

But the demonstrators moved their focus to the German embassy in downtown Bangkok as MPs and Senators met in a joint session to try to get the political crisis off the streets.

At 5 pm, they decided to assemble at the Samyan intersection, near Chulalongkorn University, and march to the German embassy on Sathorn Road, where a contentious petition will be delivered.

A statement on the United Front of Thammasat University and Demonstration’ stated that the protesters wanted German authorities to investigate whether His Majesty the King had abused German sovereignty by exercising his control over German soil. The rally outside the embassy will demonstrate the demonstrators’ aim to restore a “real” constitutional monarchy in Thailand.

Morever, This is the first time that anti-government demonstrators have threatened a foreign government. From 3 pm onwards, the Metropolitan Police Bureau has advised motorists to avoid roads in Samyan and the area around the embassy.