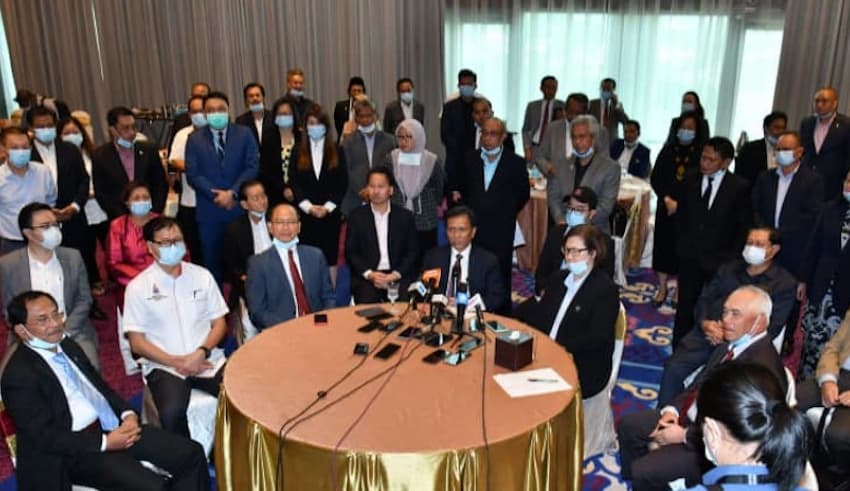 Datuk Seri Shafie Apdal, reiterated that the Sabah govt is vigilant against the suspected attempts of PN
(C) Malay Mail

Sabah ‘s chief minister , Datuk Seri Shafie Apdal, reiterated today that the Sabah government is intact and vigilant against the suspected attempts of Perikatan Nasional (PN) to undermine the state government by what he believed to be coercion and enticement.

The president of the Parti Warisan Sabah called for a conference today with all elected members of the state government at the state and federal level, and subsequently claimed the turnout was speaking for itself.

There were reports that the deficiencies were four, and nine YBS but they think today ‘s statistics demonstrate that they are solid and resilient in meeting the strain and they will resist any effort to alter their values.

44 out of 47 Warisan and non-aligned non assemblymen were present at the luncheon meeting today, and all but two MPs were present.

The three assemblymen absent were Datuk James Ratib from the Sugut assembly, Limus Jury from the Kuala Penyu assembly and Calvin Chong from the Elopura assembly.

The missing MPs were Lahad Datu MP Datuk Mohammadin Ketapi and Datuk Azis Jamman, MP for Sepanggar. Shafie said he had been reassured by those absents that they are still behind the Warisan-led state government.

Mohammadin said he must be in KL, as he is going from Putrajaya to Petaling Jaya today. He told me that Datuk Anifah Aman had approached him three times for joining their war. Yet he is with us always. He made clear his stance.

Shafie also said two of the elected officials claimed they had earned proposals although they did not go into depth. He said the state was prepared to face further pressure and coercion, particularly where there is opposition to flipping sides.

He also found out that the grand scheme was apparent in the coincidental timing of freeing former chief minister Tan Sri Musa Aman from 46 charges of grafting and the detention and indictment of his vice president and senior minister Datuk Peter Anthony.

Meanwhile, Datuk Madius Tangau, president of UPKO, stated that he had talked to Ratib and Limus and that they could not do anything.

It was also found that Chong was also unable to attend the last-minute luncheon owing to an earlier conference in his electorate when Azis was scheduled for surgery in hospital.

Earlier this week 10 Warisan MPs released a statement dismissing a story that a local Malay daily claimed there would be party defections. Shafie himself attended meetings with Pakatan Harapan Plus, the acronym for the current PKR, DAP, Parti Amanah Negara, Warisan, and Tun Dr Mahathir Mohamad party of the Parti Pribumi Bersatu Malaysia alliance.