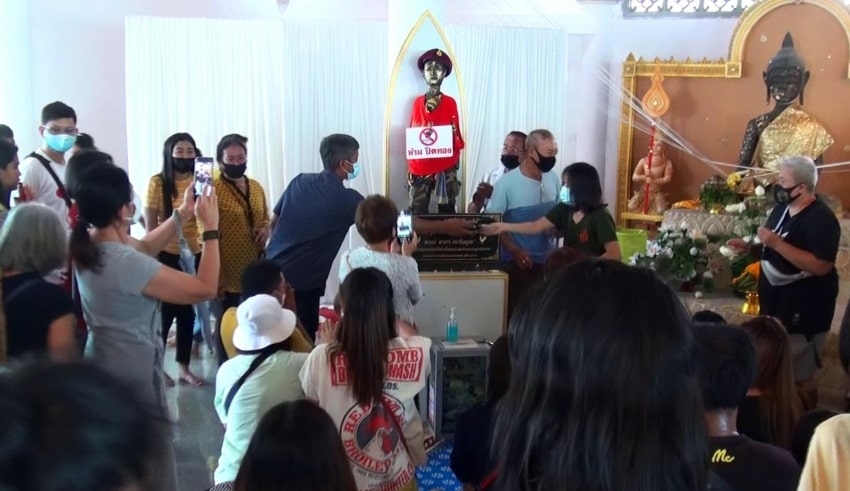 Ai Khai ‘s miraculous power has worked magic for this southern province ‘s economy battered by prolonged Covid-19 crisis. While most other parts of Thailand are still in the economic doldrums, tourists flock into this province hoping to be blessed with the boy monk’s gold-plated statue.

For weeks, flights into the province and hotels were overbooked. Last weekend’s long weekend saw over 100,000 people packing Wat Chedi, now more popularly referred to as Wat Ai Khai, a name closely associated with the spirit of the boy.

A boy’s wooden statue, aged nine or 10, is thought to give true believers prosperity. One such follower was a well-known anchorwoman and author, who attributed to having paid homage to the statue the secret of her immense wealth.

According to one tale the spirit of the boy lives on in the statue after it was instructed by a senior monk to guard a treasure trove in the temple.

As former finance minister Korn Chatikavanij has observed, Ai Khai has shot to fame. Awestruck by the ability of the statue to pull in crowds of visitors from across the country, the Kla Party leader wrote on Facebook that the province was riding high on a windfall called “Ai Khai.”

In recent months, approximately 400,000 tourists have visited the province, an astonishing number given the weak state of the economy. That is what the miracle of Ai Khai can deliver which is stated by Mr. Korn.

An economist friend told him that Ai Khai, a nickname used by people in the South for little boys, gave an economic boost to a region that traditionally doesn’t attract tourists, while Covid-19 gave rise to a newly attraction.