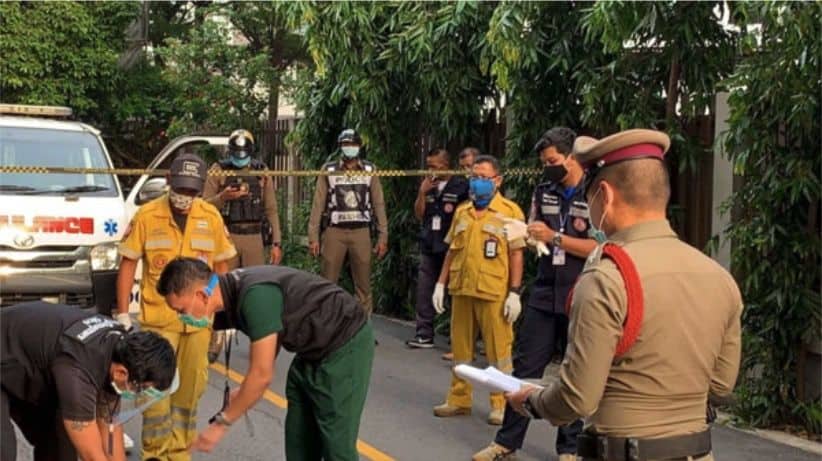 A 77-year-old Thai woman fall to her death from a Bangkok condominium in the Bang Khen district on Thursday morning. The  woman was being cared for by her granddaughter keeping her safe from the coronavirus. MS. Surinee Dokkaew, 77, was found dead about 6am on the ground at the base of the 15-storey Bangkok condominium building.

Pol Maj Than Burnachai, investigation chief at Bang Khen police station said she was neatly dressed in a light blue shirt and black trousers.  Police went to the room she was staying in on the 10th floor, and found a plastic chair near the window. Relatives told police she had no husband and stayed alone at her house. A worried granddaughter took her in at her Bangkok condominium room to keep her free of the coronavirus disease. On Thursday morning, the granddaughter went out, leaving the woman alone in the room.  A tenant in a building opposite saw the elderly woman sitting on the edge of the open window, swinging her legs. Police said it appeared the woman committed suicide, possibly because she was stressed by events. They were questioning relatives to find out more.

Police in Chiang Mai Thailand were successful stopping a woman for committing suicide by jump off a bridge into the Ping River. The incident occurred on the Kua Saree Wiangping Bridge at around 7 p.m. The unnamed woman was found to be standing on the edge of the bridge threatening to jump into the river below.

Last Thursday, a man in Udon Thani province committed suicide by hanging himself after his application for the government’s Bt5,000 relief payment was rejected. Leaving him with no money to support his 15 year-old daughter. The body of Supasit Chaokla, 42, was found hanging at 1.30pm on Thursday. Authorities believe he committed suicide two days earlier. His mother, Jiamsri Chakla, 62, said that after getting divorced, Supasit had raised his 15-year-old daughter alone. However, his income began to shrink last month after the emergency decree was announced. He owned a small eatery with daily running costs of Bt500-Bt600. He became stressed when revenue fell to Bt200-Bt300 as people stayed at home during the lockdown. That meant he could no longer afford the Bt10,000 he needed to keep his daughter in school once the term restarted. He hoped that the Bt5,000 payments would help fill the hole in his finances, but became suicidal when his application was rejected. His mother said that she would now take care of her orphaned granddaughter.