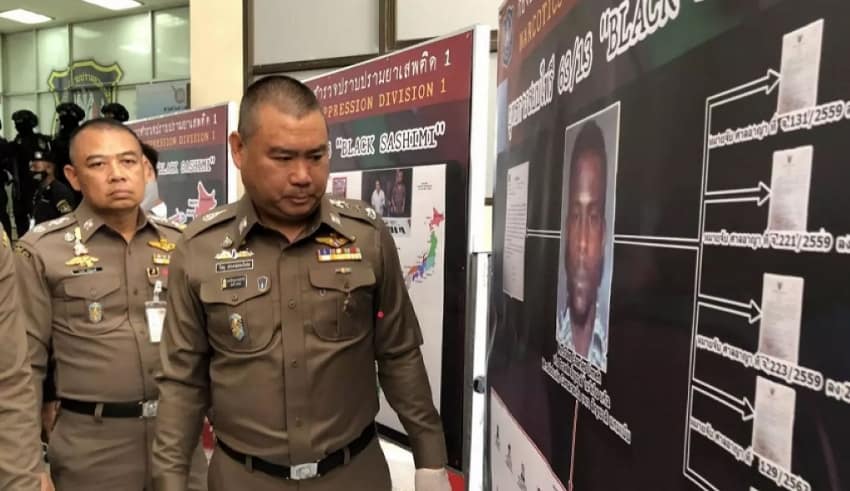 As Thailand continues to suffer economic hardship from the Covid-19 pandemic, Thailand’s Justice Minister has come up with a way to help refill the coffers. Justice Minister Somsak Thepsutin has ordered authorities to nail the businesses that launder illicit drug money from the Golden Triangle and seize 1.5 billion from them by August.

He said that anti-narcotic officials have already arrested 125 drug suspects and seized 15.7 million speed pills in Northern Thailand. Authorities are also expected to freeze 50 million baht worth of assets related to the arrested drug traffickers. The minister said the Golden Triangle that Borders Chiang Rai Province was a big drug source and traffickers. Drug traffickers actively launder money then send it back to drug syndicates outside the country.

The money-laundering involves the purchase of bullion, gold ornaments and construction materials. Furthermore online gambling which facilitates daily money transfers, Mr Somsak said. “Officials will look for suspicious businesses that have grow expediently in the past few years. The Revenue Department will also support the investigation the minister said. The Justice Minister believes intensified action against money-laundering should result in the seizure of 1.5 billion baht by August. Compared with only 700 million baht seized from drug traffickers last year. Last week 42 million baht in assets was frozen by police in Chiang Rai Province.

The drug syndicates smuggles drugs into Thailand, crossing the Myanmar-Thailand border. They then distributes the drugs to Bangkok and other major cities. The Governments of Thailand and Myanmar have independently stepped up their anti-narcotics efforts in the Thai-Burmese border area. Furthermore the center of narcotics trafficking is in the Chiang Rai’s Golden Triangle. The number of seizures of high-purity crystal meth are surging into northern Thailand from the Golden Triangle.

The demand rises and the methods of detection and enforcement also improve. It’s a vicious circle. Authorities say the number of drug seizures have risen 1000% in just the past 2 years. A stark indication of the growth in industrial-scale production in the Golden Triangle. Thailand remains a major trafficking route for the artificial drug manufactured in Myanmar’s Shan and Kachin states – the north-eastern states of Myanmar that border China, Laos and Thailand. The Golden Triangle is the meeting point of three countries – Myanmar, Thailand and Laos. -It has long been the gateway for the region’s drug trade. It’s the perfect witch’s brew of geography, crime and political interests that allows the drug trade to flourish.