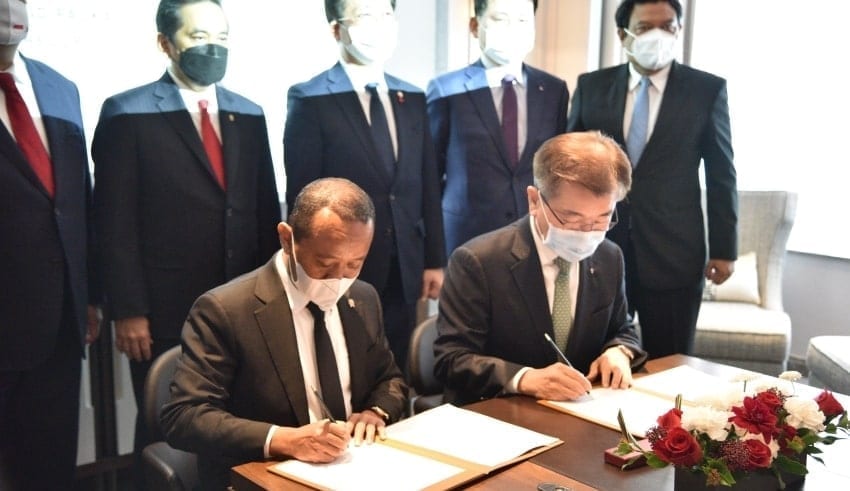 The construction of an electric vehicle battery manufacturing plant will begin in the first half of 2021 after the consortium of Indonesian state enterprises and LG Energy Solution Ltd of South Korea signed an agreement worth US$9.8 billion which is also Rp142 trillion.
(C) bahlillahadalia / Twitter

The construction of an electric vehicle battery manufacturing plant will begin in the first half of 2021 after the consortium of Indonesian state enterprises and LG Energy Solution Ltd of South Korea signed an agreement worth US$9.8 billion which is also Rp142 trillion.

The said memorandum of understanding was signed on 18th of December by Bahlil Lahadalia who is the Indonesia’s Head of the Investment Coordinating Board and LG Energy Solution in Seoul, South Korea, and was witnessed by South Korea’s Minister of Trade, Industry and Energy, Sung Yun-mo.

In fact, the investment amounts to 9.8 billion US dollars, or some 142 trillion Rp. For them, it is a remarkable amount because there was no such large investment during the post-reform era which was seen from the BKPM data

In view of this, under the MoU, both parties agreed to develop a strategic investment project for the manufacture of battery cells for electric vehicles integrated into the mining, smelting, refining, precursor and cathode industries. The consortium of state enterprises consists of MIND ID (Inalum), PT Aneka Tambang, PT PLN (Persero) and PT Pertamina (Persero).

The agreement was a follow-up to the November 2019 bilateral meeting in Busan between Indonesian President Joko Widodo and his counterpart from South Korea, Moon Jae-in. The project will be built at two sites, namely North Maluku for the mining and smelter industries, while in the Batang Integrated Industrial Area in Central Java, the production plant for the precursor, cathode and some parts of the battery cell will be constructed.

Consequently, the selected batteries produced will be supplied to an electric vehicle plant in the region, which will begin production in the near future. This is because the development of Batang is a strategic industrial field. There will be a mix of international investors, state enterprises, national industry, regional national entrepreneurs, as well as small and medium-scale enterprises.

Morever, The growth of the integrated electric vehicle battery industry is a tangible step in line with the government’s objective of boosting the economic transition towards Advanced Indonesia by 2045. Downstreaming is one type of transformation in the mining sector. Globally, countries have started to reduce fuel oil consumption and carbon dioxide emissions, increasing the use of electric vehicles to 15-100% of total vehicles.