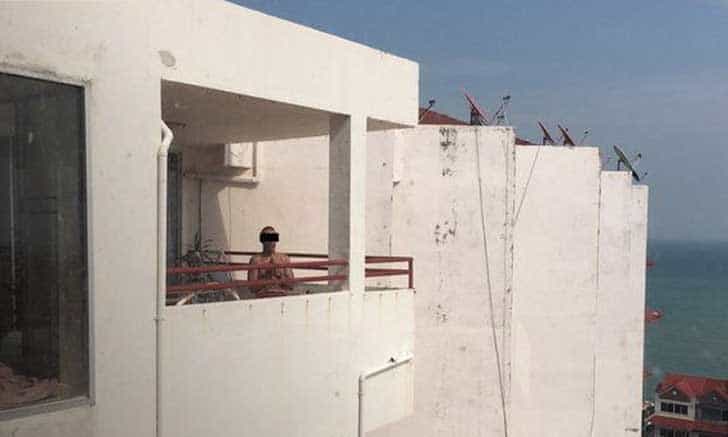 A 56 year-old Briton was detained in Rayong Thailand for allegedly pushing his wife from the balcony of their 8th floor condo. His wife luckily landed on the 7th floor suffering a broken ankle and various other injuries.

According to police and onlookers the Briton then ended up praying for hours on the balcony. Officials at Ban Chang Police Station were called to the scene yesterday along with Immigration Police, Crime Suppression Officials, and the local rescue team. Upon arrival police and rescue workers found Ms. Sukanda 56 on the 7th floor of the condo still conscious. She was screaming in pain yelling that her English husband had thrown her off their balcony. The local rescue team then rushed her to the Ban Chang Hospital in Rayong.

Police then tried to communicate with the Briton, however he just kept praying on the condo balcony for hours. No matter what officials said the man never responded, he just kept on praying with his hands placed in front of his chest. Police were able to contact one of the Briton’s friends and ask for his assistance. Upon his arrival he said the mans name was Dave. He shouted to Briton Dave on his balcony. After 2 hours of communicating with Dave, he opened his door and allowed officials in to talk. Once the man had calmed down and revealed that the couple was having a fight when his wife fell off their balcony.

According to Thai Media police would interview his wife Sukanda once she had recovered at hospital. Ms. Sukanda was critically injured with a fractured hip, a dislocated arm and a broken ankle. Thai media reported the Briton (Dave) had legally entered the country but couldn’t return to England due to Covid-19. Dave revealed that staying in the condo for months has caused high stress and tension, resulting in the fight with his wife. Police have not charged the Briton with any offence and are awaiting his wifes testimony.