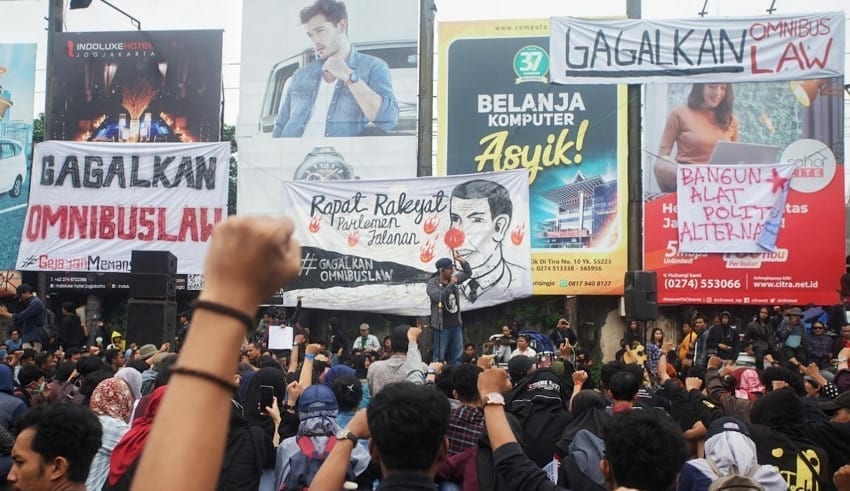 The hashtag #GejayanMemanggil #GagalkanOmnibusLaw will be touted. Demonstrations against the Omnibus Law job creation bill (RUU Cipta Kerja) continue to flare up in various regions. This time, the action was carried out by workers and students on Jalan Gejayan, Yogyakarta, Monday (9/3).

Vice President of the Student Executive Board (BEM) of the Yogyakarta Muhammadiyah University Student Family (KM UMY), Riky said, about a hundred people who joined the moving UMY Alliance would join the action.

Chairman of the All-Indonesia Workers’ Union (SBSI) of the Yogyakarta Regional Office Dani Eko Wiyono said the Omnibus Law Bill could not be passed. For this reason, workers will join with students.

“The most appropriate step right now is to fight with the voice of the people,” said Eko, Friday (6/3).

The government is seen as trying to raise people’s awareness to accept the bill as a need of the State to facilitate economic development.

Separately, according to the Aliansi Rakyat Bergerak, the bill will only harm workers and society. Omnibus Law is considered to apply the concept of a clean sweep to things that hinder investment, such as licensing, labor, spatial planning, and land acquisition.

So far at least six impacts of the Omnibus Law have been detrimental to workers and society. Among them, the potential to extend work hours and overtime for workers, setting low minimum wages, violations of workers’ rights of association, the reduction of trade union authority. Even the loss of the rights of women workers to leave menstruation, pregnancy and miscarriage.

From the environmental side, the bill also has the potential to cut and change the concept of administrative requirements, such as centralizing policies, eliminating community involvement, removing building permits, reducing AMDAL substance, eliminating environmental criminal sanctions, damaging business practices or changing the function of space or the environment.

The bill is also considered to present a situation of land monopoly by the Land Bank for investment purposes.

In addition, this bill also has implications for market-oriented educational practices. For example, in the form of commercialization, links and matches with industry, and the formation of an educational curriculum that focuses on work orientation.