The Asian Affairs > Blog > Malaysia > According to PM Putrajaya, the sky is the limit for Putrajaya-Abu Dhabi relations. 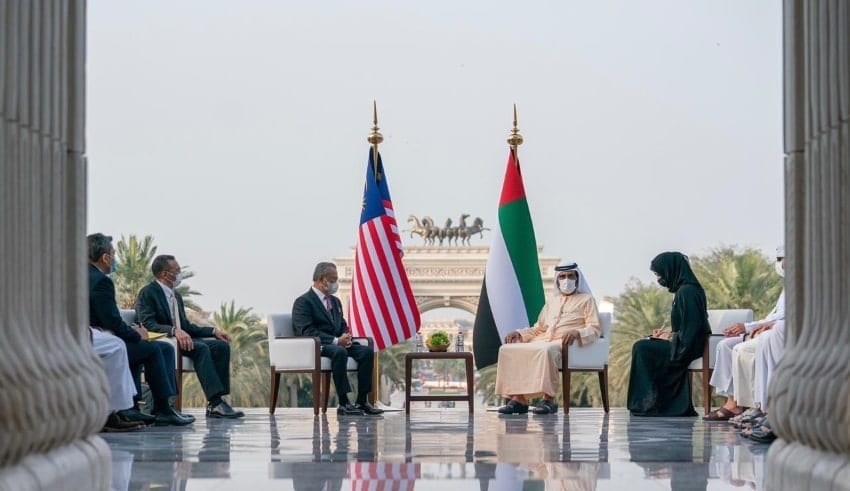 In an unprecedented leap, Abu Dhabi has agreed that in its cooperation with Kuala Lumpur, "the sky is the limit."
(C) HishammuddinH2O / Twitter

ABU DHABI: In an unprecedented leap, Abu Dhabi has agreed that in its cooperation with Kuala Lumpur, “the sky is the limit.”

“(The phrase) ‘the sky is the limit’ was used by the Crown Prince when referring to the cooperation of the two countries,” Muhyiddin said today.

According to Muhyiddin, the Crown Prince described the two countries’ relations as “close and extraordinary.”

The prime minister stated that bilateral trade between the two countries would increase fivefold from its current value of US$3 billion (about RM12 billion).

“During the discussion, I also mentioned that our bilateral trade needs to be increased and the Crown Prince responded: He agreed (that it would be) five times,” he said.

Muhyiddin also reported that the UAE wished to increase its investment in Malaysia, which is currently estimated at approximately US$1.6 billion.

At the conclusion of his two-day official visit to the UAE, Muhyiddin told Malaysian media, “The UAE has not set a timetable for increasing trade and investment in Malaysia, but we must move quickly.”

According to the prime minister, he also addressed with the Crown Prince his proposal to introduce digital education for all of Malaysia’s six million students.

“To my surprise, the Crown Prince said: ‘consider it done’. I was stunned. I am not sure about the cost. It could be around RM3 billion to RM4 billion as it involves gadgets, content, software and ecosystem.

Muhyiddin also mentioned that the UAE was eager to learn from Malaysia’s experience in assisting SMEs affected by Covid-19.

He added that the two countries have agreed to develop food security diplomacy cooperation to ensure adequate food supplies in the event of a potential crisis.

Muhyiddin claimed that a food security hub would be developed in both Kuala Lumpur and Abu Dhabi, and that the initiative would support the growth of the Malaysian food industry.

During the visit, the two countries signed a memorandum of understanding (MoU) on the establishment of Food Security Diplomacy Cooperation.