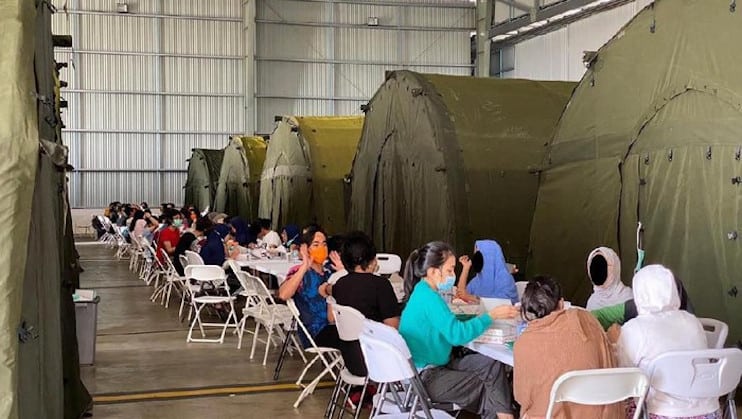 Minister of Health Terawan Agus Putranto together with Coordinating Minister for PMK Muhadjir Effendy and BNPB Head Doni Monardo flew to Natuna to pick up Indonesian citizens from Wuhan, China who were observed for 14 days.

A total of 238 Indonesians will return to their respective regions after undergoing a period of observation to ensure they do not show symptoms of being infected with COVID-19.

On that occasion, Minister Terawan asked the health department to keep an eye on Indonesian citizens (WNI) who returned from observation in Natuna despite stressing that they were all in good health.

“After returning home we ask the health service to monitor, called surveillance tracking. It continues to be done. It’s automatic. But it’s not like intelligence is constantly being examined, it is an observation that is comfortable and family-friendly so that everything has nothing to worry or anything,” said the Minister Terawan when met at Halim Perdanakusuma Airport, Jakarta, Saturday (15/2).

On another occasion, the Presidential Palace through President Jokowi’s Spokesperson, Fadjroel Rachman, expressed his gratitude to the Natuna people who had hosted the citizens of Wuhan to undergo transit observation.

“Thank you very much and respectfully to all Natuna people who host our fellow countrymen. 285 people underwent a transit observation from Hubei Province, China, until the return day on Saturday, February 15, 2020,” said Fadjroel Rachman.

He mentioned that the Government of the Republic of Indonesia through the Minister of Health along with all the Coordinating Ministries, Ministries and related Institutions in accordance with Presidential Instruction No. 4/2019 guarantees that all Indonesian citizens are in good health.

Indonesian citizens have also undergone an observation transit program in Natuna in accordance with the protocol of the World Health Organization (WHO).

“This conviction was reiterated by President Joko Widodo that the Government followed all health protocol processes from WHO on Friday, February 14, 2020 in Magelang,” he said.

As is known, today (15/2) Indonesian citizens returning from Wuhan and completing a 14-day observation period in Natuna Regency, Riau Islands, will be released with a Malay traditional event.

“Later, from an adat institution, there will be a prayer for congratulations for fresh flour,” said Riau Islands Natuna Regent Hamid Rizal while preparing for the repatriation of Indonesian citizens from Wuhan in Natuna, Riau Islands, on Saturday.

Prayers will be delivered, so that the citizens of Wuhan can be safe, healthy up to their respective home areas. “It shows that our citizens safely get here and go home, that is our custom,” he said.

However, he did not yet confirm when and where the traditional ceremony could be held, because in terms of health protocol, the quarantine period for Indonesian citizens from Wuhan ended on Saturday at 12.00 WIB.