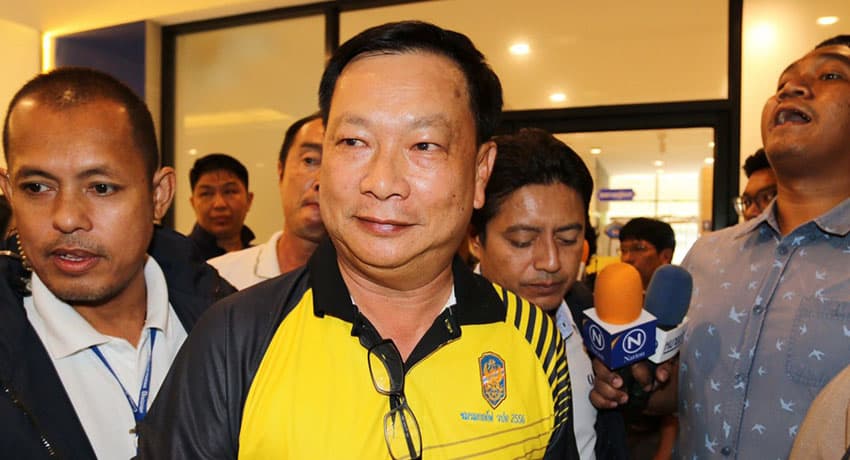 The charges stem from the abduction and murder of a brother of a senior judge to force her to drop an indictment against Pol Lt Col Banyin in a share transfer case. Wirachai Sakuntaprasoet, an elder brother of Bangkok South Criminal Court judge Phanida Sakuntaprasoet, was kidnapped by four men outside the court on Feb 4. The 70-year-old was later killed and his body burned and dumped into the Chao Phraya River in Nakhon Sawan. One of the alleged kidnappers was Pol Lt Col Banyin, who drove Wirachai from Bangkok to a wood in Khao Bai Mai in Nakhon Sawan, police revealed on Monday. Pol Lt Col Banyin and two aides alleged accomplices, Manat Thapnin and Narongsak Pomchan, were arrested on Sunday.

Police added premeditated murder and conspiracy to detain a person, resulting in his or her death to the charges following the discovery of bloodstains in one of four seized cars and bone fragments believed to belong to Wirachai, a police source told the Bangkok Post. Investigators found the fragments, damaged car tyres and shirt buttons where the victim was supposedly burned.

The alleged crime took place as a March 20 ruling on his share transfer case draws near. He was accused of forging documents to set up the transfer of 300 million baht’s worth of shares owned by his friend and businessman Chuwong Sae Tang, who was killed in a road accident in a car driven by Pol Lt Col Banyin in 2015.