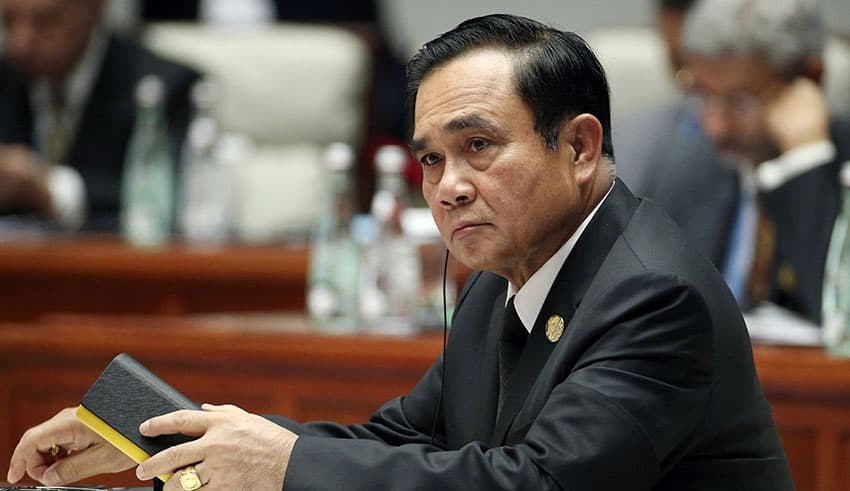 Prime Minister Prayut Chan-o-cha first time ever defended a land sale by his father publicly, insisting that it did not favour anyone after the opposition raised the issue during the first day of the censure debate against the government.

Yutthapong Charassathian, a Pheu Thai Party MP for Maha Sarakham, claimed that the land which was sold by Gen Prayut’s father to a private company in 2013 was just a fish pond. “This is not a land plot. It is a fish pond. People who are in their right mind would not buy it. The transaction was worth 600 million baht. This is unusual,” Mr Yutthapong said.

At the time, the land was estimated to be worth about 200 million baht, Mr Yutthapong alleged. He also claimed that part of the money from the land sale appeared in Gen Prayut’s assets declaration submitted to the National Anti-Corruption Commission.

Col Prapat Chan-o-cha, Gen Prayut’s father, sold nine plots totalling 50 rai in Bangkok’s Bang Bon district to 69 Property Co Ltd on May 9, 2013, seven days after the company was registered, according to Isara News Agency, which quoted official documents. A major shareholder of the company at the time had a British Virgin Islands address, Isara News said, citing Business Development Department data. The major shareholder now is a company linked to a liquor and property billionaire. In response, Gen Prayut dismissed Mr Yutthapong’s claim that the land was a fish pond.

Finance Minister Uttama Savanayana explained that the contract to manage the Queen Sirikit National Convention Centre was renewed after the Yingluck Shinawatra government amended the act in 2013 to allow the government to review contracts with private companies. Mr Uttama said NCC Management & Development Co, the manager of the convention centre, proposed that the contract be renewed, and Thammasat University was then commissioned to study the proposal.

During the censure debate, Sompong Amornwiwat, the leader of the opposition and the Pheu Thai Party, outlined allegations against the government, including its failure to uphold democracy, exploiting the justice system to favour themselves and associates, failure to improve the economy and failure to suppress corruption. Pitha Limcharoenrat, a list MP for the now-dissolved Future Forward Party, criticised Gen Prayut for failing to improve the economy. He alleged that the government’s economic policies favour big businesses at the expense of the general public.