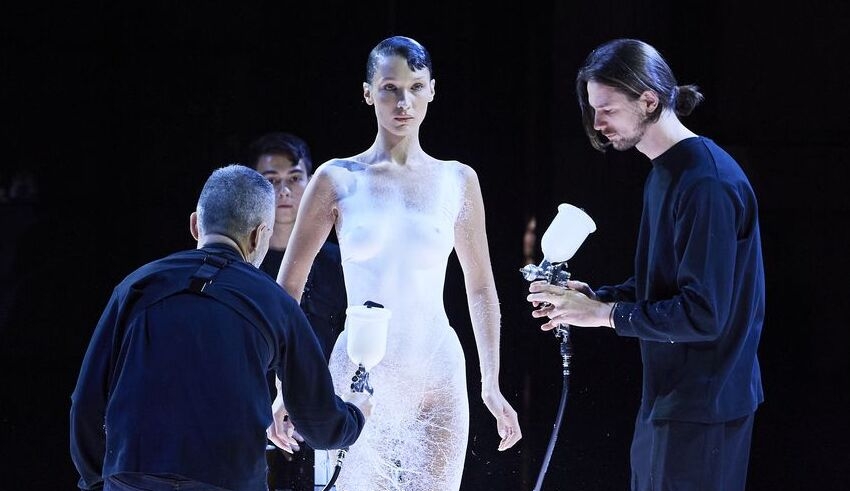 The finale of Coperni's exhibition saw Bella Hadid walking out wearing nothing but a pair of naked underwear before a crew of scientists sprayed her with paint.
(c) Elle

During Paris Fashion Week, guests were given signals that they might expect something huge from the Coperni SS23 show; but, we very much doubt that anybody could have foreseen the grand finale, which has kept the internet buzzing with wide-eyed fascination and incredulity ever since it occurred.

The finale of Coperni’s exhibition saw Bella Hadid walking out wearing nothing but a pair of naked underwear before a crew of scientists sprayed her with an innovative new liquid that gradually changed into an actual outfit. The model then took one last walk down the catwalk to demonstrate to the audience how the spray-on clothing worked.

Coperni is a brand that has been known with pushing the frontiers of fashion via the use of scientific innovation. The company was founded in 2019 by Arnaud Vaillant and Sébastien Meyer. ‘The brand is named after Copernicus, the Renaissance-era astronomer, so it is inspired by science, progress, innovation, and technology,’ Vaillant told ELLE UK in an interview earlier this year, when they had already experimented with hand-blown glass handbags, antibacterial clothes, and XR-shot campaigns.

But for SS23, the duo absolutely outdid themselves by developing the spray-on outfit in collaboration with Spanish fashion designer and scientist Manel Torres and his team at London’s Bioscience Innovation Centre. Torres’ Fabrican liquid is used to manufacture the spray. This liquid contains fibers that are suspended in a polymer solution. As soon as the spray comes into contact with a person’s skin, the liquid evaporates. It is also possible to remove it, transform it back into a solution after it has been used, and then use the solution once more.

The scene was reminiscent of the iconic moment from Alexander McQueen’s Spring 1999 show, when car-paint technology was used live on the catwalk to spray-paint model Shalom Harlow’s white gown.