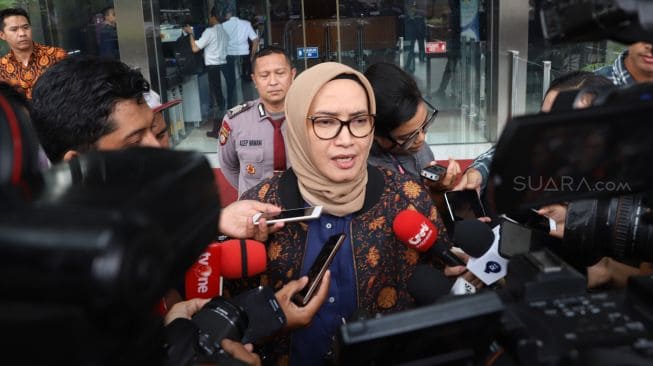 “Imposing the sanction of Permanent Dismissal to Teradu VII Evi Novida Ginting Manik as a Member of the General Election Commission of the Republic of Indonesia since this decision was read,” Acting Chairperson of DKPP Muhammad was quoted by the decision file.

DKPP considered that the issue of determining elected DPRD members showed an error, but that was ignored by the Complaints. Thus, Evi Novida as Coordinator of the Election Commission and Logistics Logistics Technical Division of the Republic of Indonesia is responsible for the problem.

Evi has a greater ethical responsibility for legal uncertainty and injustice due to the determination of election results that cannot be held accountable for their validity and credibility. In addition, Evi also served as Deputy Regional Coordinator for the Province of West Kalimantan.

Thus Evi Novida is responsible for coordinating, organizing, controlling, monitoring, supervising, and evaluating the Determination and Documentation of Election Results. In addition, Evi Novida has also been sanctioned with a strong warning on DKPP Decision Number 31-PKE-DKPP / III / 2019 dated July 10, 2019.

Evi Novida was proven to have violated the code of ethics and was given a severe warning sanction and was dismissed from the position of chairman in the previous division. Ethical sanctions in the form of stern warning accompanied by dismissal from the Division Coordinator, constitute a category of serious violation of the code of ethics.

This case was submitted by Gerindra Party politician, Hendri Makaluasc (Complainant) who is also a candidate for the DPRD member of West Kalimantan Province for the period 2019-2024.

DKPP said, Teradu VIII and XI had properly followed up on the Bawaslu Decision which set Hendri Makaluasc’s vote from 5,325 to 5,384. Then change the voice and vote acquisition Cok Hendri Ramapon number seven of the original Gerindra Party 6,599 to 4,185 votes.

However, the Indonesian KPU through Letter Number 1922 / PY.01-1-SD / 06 / KPU / IX / 2019 dated September 4, 2019 stated that the a quo Bawaslu Decision could not be implemented. The Indonesian KPU unilaterally requested the cancellation of the results of the open plenary meeting of the West Kalimantan KPU which stipulated the recapitulation of votes, seats and elected candidates for the West Kalimantan Province DPRD in accordance with the Court’s Decision Amar by setting aside the RI Bawaslu’s Decision.

DKPP assesses that Teradu VIII and XI have the duty and authority to determine the vote acquisition of election participants based on the recapitulation of vote counting and to determine the elected candidates for the Provincial DPRD in each Electoral District. Based on these provisions, Teradu VIII and XI should not necessarily carry out the instructions of the Indonesian KPU.

Responding to the decision, Evi Novida Ginting claimed that he could not answer further to the DKPP decision handed down to him. Evi also wants to study the verdict.

However, Evi admitted that she objected to the news which mentioned the DKPP’s decision as if the KPU was changing the results of the illegal vote acquisition. “Whereas the KPU in this case enforces a law which carries out the Constitutional Court’s decision on the vote acquisition,” Evi said.