The Asian Affairs > Latest News > Geo Politics > Chiang Mai Gathering: Holding a Rally to Speak Up and Demand Oust of the PM 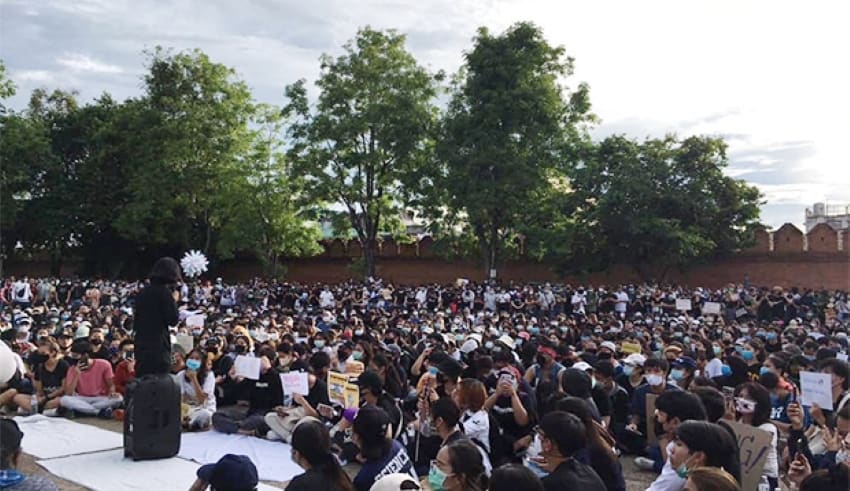 The uncontrollable students, activists and ordinary Thais held a rally in Chiang Mai demanding the ouster of Prime Minister Prayut Chan-o-cha and his administration.

A smaller rally of the same demands was organized in Ubon Ratchathani, with the Free Youth community participating in the two nonviolent gatherings.

Tha Phae Gate, one of northern city’s icons, was engulfed by demonstrators offering their three-finger salutel logo and holding placards asking Gen Prayut and his government to back down. They have asked for the House to be disbanded, and for a proposed new constitution.

Police were on the scene advising them to stop the protest, claiming it defied the emergency order, which might trigger the novel coronavirus to wave a second. A coalition of university and high school graduates, along with common citizens, held a rally in the municipality near the City Pillar Shrine in Ubon Ratchathani, calling on the government to back down.

The two demonstrations were nonviolent and took place a day after a major rally organized by the Free Youth party and the Student Union of Thailand at the Democracy Monument in Bangkok, to which several hundred demonstrators were present. It finished at midnight around.

The Bangkok rally was the first major political event since the coronavirus epidemic started. Jatuporn Prompan, the red-shirt chairman of the United Front for Democracy Against Dictatorship, sent a message to the protesters on Sunday saying they should make their demands loud and clear. Their declaration demands that Gen Prayut dismantle the Assembly, cease resident bullying and create a new charter.

In view of this, Mr Jatuporn urged demonstrators to ignore the monarchy problem and called on officials to be cautious and open-minded, as the rally was conducted with good intentions.