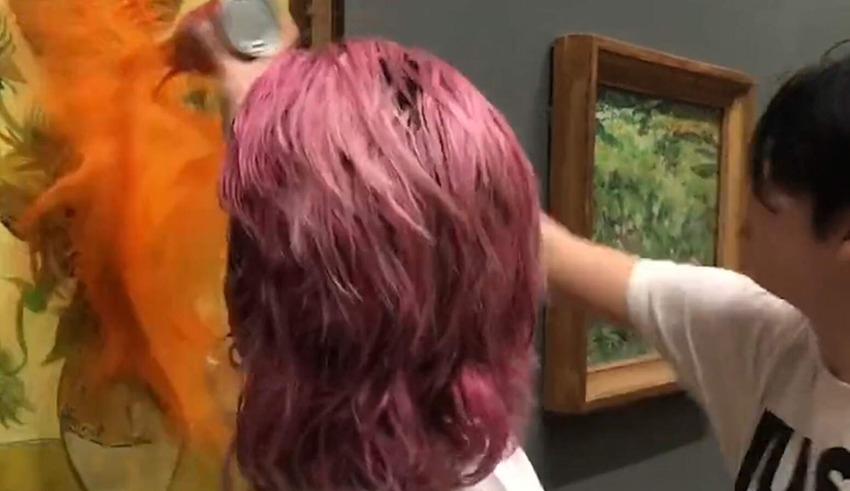 According to the gallery, the demonstrators caused “minimal damage to the frame, but the painting itself is intact.”

Just Stop Oil has organized a series of high-profile rallies in an effort to halt the United Kingdom’s approval of the exploration, development, and production of fossil fuels.

Two protesters from the organization were arrested by London’s Metropolitan Police for criminal damage and aggravated trespass at 11 a.m. local time after they “threw a substance over a picture” at the Trafalgar Square gallery and fastened themselves to a wall (10am GMT).

The police reported that they had unglued the demonstrators and transported them to a police station in central London.

According to the National Gallery, the two protestors “appeared to glue themselves to the wall next to Van Gogh’s Sunflowers” and threw a “red substance” at the painting. The room was evacuated of guests and the police were called, the report continued.

A video posted on Twitter by the environment correspondent of the Guardian newspaper, Damien Gayle, and retweeted by the eco-activism group shows two ladies wearing T-shirts with the phrase “Just Stop Oil” tossing soup cans at an iconic painting.

After being glued to the wall, one of the activists yells, “What is more valuable, art or life?”

She asks, “Are you more concerned with the preservation of a picture or the conservation of our world and its inhabitants?”

In the footage, one individual can be heard exclaiming “oh my god” when soup hits the canvas, while another calls for security as soup pours from the frame and onto the floor.

Just Stop Oil stated in a press release that its activists threw two cans of Heinz tomato soup at the painting to demand that the British government halt all new oil and gas projects.

Later, it tweeted the protest’s message: “Pick life over art.”

The activist group calculated that the painting was worth $84.2 million.

The National Gallery’s website states that the 1888 signed picture was acquired by the gallery in 1924.

Van Gogh made a total of seven versions of Sunflowers, five of which are on exhibit in museums and art galleries around the world.

One of these institutions, the Van Gogh Museum in Amsterdam, stated that it was “keeping a careful eye on changes” that could compromise its security procedures.

The attack occurred one week after British Home Secretary Suella Braverman issued a threat to direct-action climate demonstrators, whom she claimed were employing “guerrilla tactics” to cause “chaos and misery” among the people.

She stated, “Whether you’re Just Stop Oil, Insulate Britain, or Extinction Rebellion, breaking the law is unacceptable, and that’s why we’ll continue to put you in jail.”

In June, two activists attached their hands to the frame of Peach Trees in Blossom by Vincent van Gogh at the Courtauld Gallery in London.

In July, supporters at the National Gallery taped their hands to the frame of John Constable’s The Hay Wain.

They initially covered the canvas with a “reimagined rendition” of the bucolic picture, depicting the area as polluted, littered with flames, and flown over by aircraft.

In the same month, they affixed themselves to a life-size replica of Leonardo da Vinci’s The Last Supper at London’s Royal Academy.

Met Police Commissioner Mark Rowley stated on the protests that he was “frustrated that so many police are being diverted from addressing the most pressing community issues.”