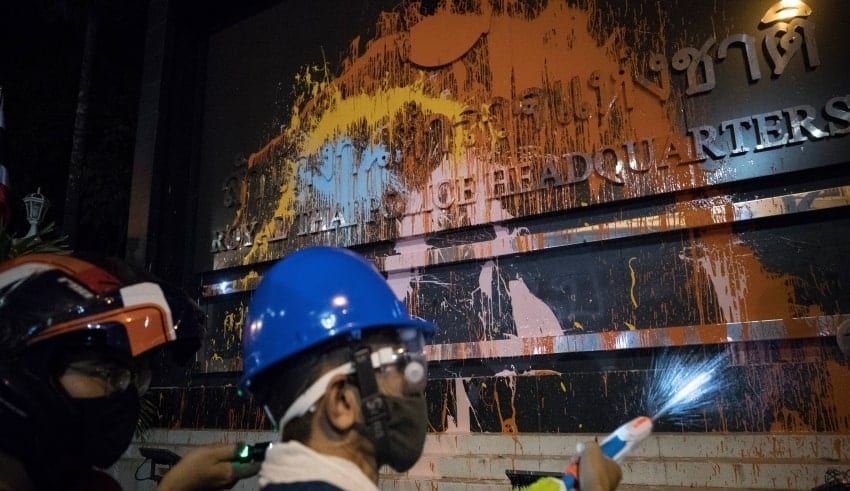 Pol Col Kissana Phathanacharoen, deputy spokesperson highlighted that demonstrators had hurled objects at the headquarters building and splattered paint all over the signboard until the protesters dispersed.

Consequently, The police in Pathumwan were gathering evidence and filing a court case. Demonstrators have used slingshots to shoot metal bolts and glass marbles at riot police, and splashed oil paint on the faces of policemen, causing their mouths and eyes to become annoyed. Their list of wounded police was also being collected by interrogators. In fact,  At Ratchaprasong intersection, the protesters had not requested approval for their protest. They had been warned about rally rules, the spokesperson added.

Pol Col Krissana shared that the  police were attempting to deter violence and clashes occurred near the parliament complex in Dusit district between opposing groups of demonstrators. In view of this, He said that anti-government protesters had sprayed paint on 13 security cameras on Wednesday to keep their actions from being detected, and destroyed the police headquarters signboard, fencing and lights.

The police measured the damage and the Special Branch police had already lodged a report with the Pathumwan police station about the damage. He said three border patrol policemen were mildly wounded by objects hurled from outside the police headquarters, and his tires were punctured and sprayed with paint by a police car from Suwinthawong station.

Morever, The anti-government protesters led by former and current university students gathered again this time at the Ratchaprasong junction, which is adjacent to the police headquarters. They are asking for constitutional changes, for Prime Minister Prayut Chan-o-cha to resign and for the Royal Institution to be revamped.