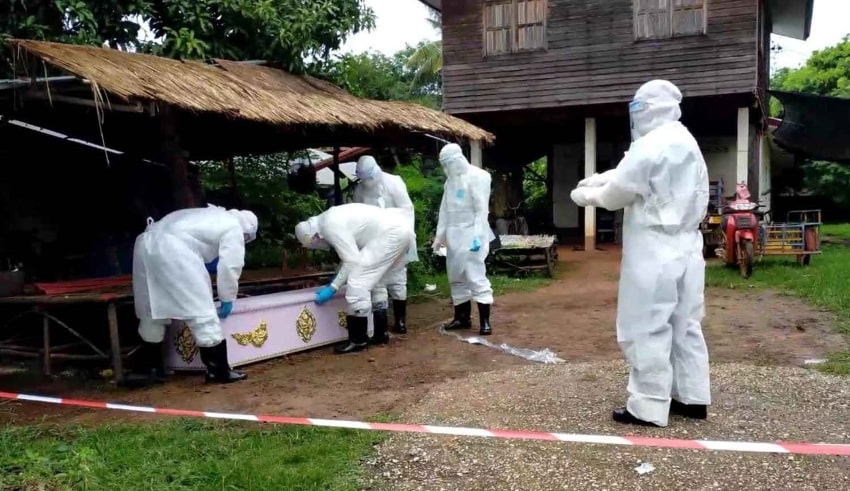 An elderly Lao man visiting his daughter and family died of an unknown cause in the district of Nong Han on Tuesday, sparking a Covid-19 scare. Health workers dressed in PPE uniforms arrived quickly and carried his body away in a sealed box, where samples were taken for examination.

Khampoun Phimphadee, 61, and his unnamed wife arrived at Ban Nong Lat in the Nong Mek tambon district of Nong Han about two weeks ago to visit their 30-year-old daughter Dido, who had lived there with her Thai husband and their two children for about 10 years. Mrs Dido said that her father and mother were traveling from Vientiane, crossing the Mekong River via a normal border crossing. They landed in Nong Khai province’s Phon Phisai district, and hired a vehicle to carry them to Ban Nong Lat.

At Ban Nong Lat, the two stayed in a house owned by relatives of her husband, Mrs Dido said. She found her father turned up unwell a few days ago and had a cough. She and her mother returned from making merit in a temple about 9 am on Tuesday, and were told by neighbors that Khampoun had died. She went to the house where her dad was sleeping, and found him dead in front of the house on a bamboo pad. The guy had vomited blood, seeing it splattered on the ground

The samples from the scene were being examined in a hospital lab to see if the man had died from Covid-19. According to the governor of Udon Thani, they have briefed on the matter and would make the test results public as soon as they became available.