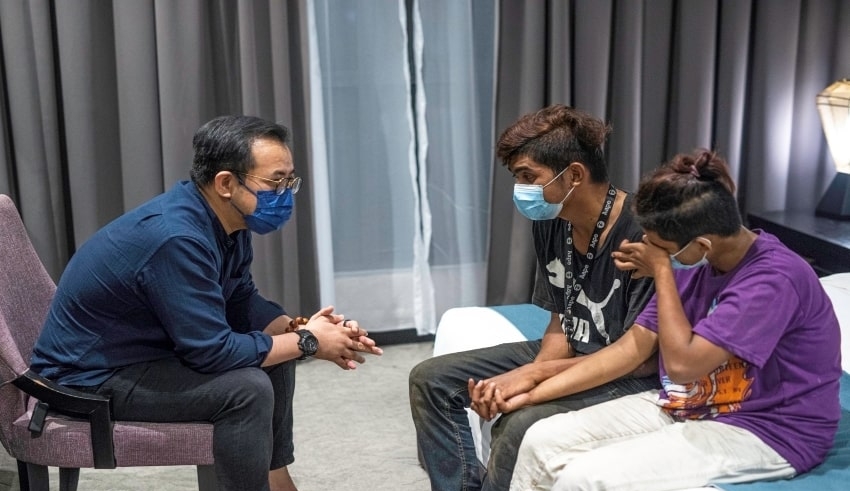 Bukit Mertajam MP Steven Sim took initiative and haas come to the aid of a homeless couple in Penang after members of the public alerted him of their heartbreaking living conditions.
(C) scheekeong / Twitter

Bukit Mertajam MP Steven Sim took initiative and has come to the aid of a homeless couple in Penang after members of the public alerted him of their heartbreaking living conditions.

The DAP politician took the chance to tweet from his Twitter account on Saturday that the unfortunate husband and wife had been sleeping on a footpath near Taman Bidara in Bukit Mertajam for three days with little food.

Sim was then able met with the couple, only known as Shah and Siti, and put them up at a hotel for the night. The unfortunate couple told him they couldn’t find a way out of their dire situation.

Shah’s story began when he left Kelantan for Penang to build a better life but when they arrived, the movement control order (MCO) came into effect and hampered their hopes.

They found shelter at an abandoned building in Taman Bidara. In his heartfelt Facebook post, Sim tried to debunk stereotypes of homeless people. Sim added that Siti has a large container which she uses to save the money they earned to rent a place one day.

“I was so touched to see this young couple going through thick and thin together.”

To help Shah and Siti get a head start in life, Sim brought the couple shopping to buy daily essential items for the next two weeks ahead of the full lockdown.

He also bought them each a mobile phone so they can contact loved ones and each other, as well as new clothes.

“If Shah wants to find work, he has to dress smart. I asked Siti if she wanted to wear a tudung because I saw she wore one in her IC photograph and she said yes,” said Sim, who bought her a few pieces of tudung.

The former youth and sports deputy minister rented a home for the couple and said he will continue paying for the rent until Shah finds a job and they are able to manage financially.