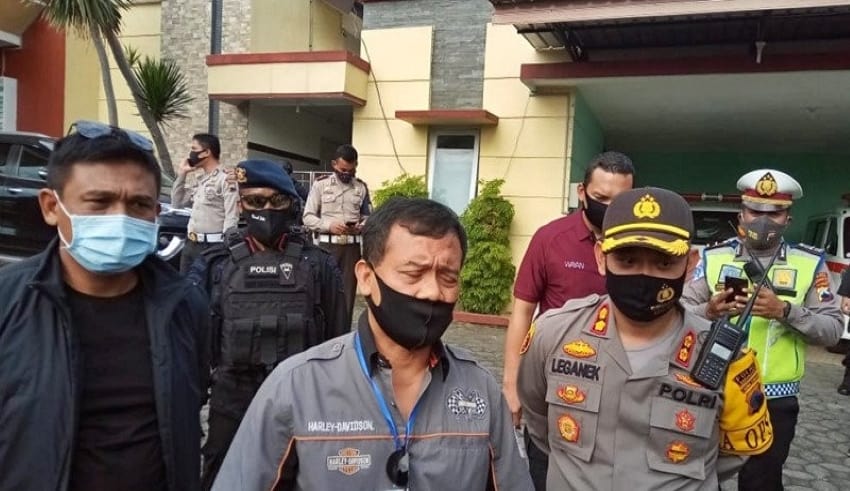 The police become the target (again) of terrorist acts. Karanganyar Police Deputy Chief Busroni and his driver, Bripda Hanif Ariyono, were victims of the attack by the sickle gunman.

At that time the Karanganyar District Police officer along with a group of volunteers would carry out a mountain trail to do a cleaning to Lawu’s hiking trail.

When all the participants were preparing at the entrance of the hiking trail, suddenly a man chased after Busroni who was sitting near the Muslim prayer room (mushala). The perpetrator also attacked his driver and the volunteer.

The perpetrator of the attack was suspected of knowing the existence of the activity. This can be seen from the luggage carried by the perpetrator in his bag.

Karanganyar Police Chief, AKBP Leganek Mawardi, explained that the bag carried by the perpetrator contained a change of clothes, pants, toiletries, cutlery, and a small book.

“In the bag, there are clothes, pants, toiletries, toiletries we have secured. And some of the booklets were already secured,” Leganek said at the Karanganyar Police Headquarters as quoted by Okezone, Monday, June 22.

“I was sitting in a chair, moving things from a carrier bag to a small bag. Suddenly someone attacked,” Busroni told reporters on Sunday.

Busroni also said that he could fend off the perpetrator’s attacks. At that time he brought a climbing stick.

He only suffered injuries in the hands that are used to fend off. The driver was injured in the neck and back. While volunteers also suffered minor injuries.

Lutfi explained the perpetrator was shot in the leg three times. He was immediately rushed to the hospital.

“Then he was taken to hospital, bled to death and died,” he said.

The victims were then taken to Karanganyar District Hospital for treatment. Knowing the incident, Central Java Police Chief Inspector General of Police Ahmad Luthfi approached the hospital at around 2:50 pm West Indonesia Time.

After seeing the members who were victims, the Police Chief also checked the scene at the entrance gate of Cemoro Kandang. The police chief arrived at around 16:35 WIB.

The identity of the perpetrator of the Karanganyar Wakapolres Police Commissioner assault has been revealed. The police confirmed that the perpetrator was named Karyono Widodo, a resident of Madiun, East Java.

Wihastono revealed that Detachment 88 will further investigate this case. Including the possibility of the perpetrator moving alone or in groups.

Karyono’s brother, Rohman Budi Santoso, was also at the Bhayangkara Hospital in Semarang on Monday. The handover of Karyono’s body has also been carried out.

Rohman said the family handed over the funeral process for his brother.

He confirmed that Karyono had been in the Mako Brimob cell and was released from prison in 2019. Rohman said that his brother was a closed person and he also claimed to not know the legal case that had ensnared Karyono before.