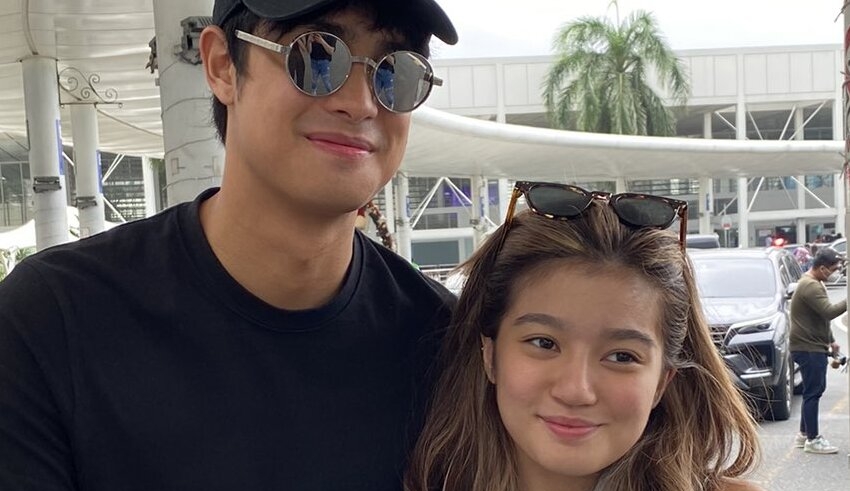 Donny Pangilinan and Belle Mariano arrived in Las Vegas before heading to Los Angeles, where they spoke with media, watched an NBA game, and even played Topgolf
(c) Twitter

DonBelle, the new “it” romance duet who just visited the United States to promote their latest film, An Inconvenient Love, is having a nice time.

Team Rom-Com Donny Pangilinan and Belle Mariano arrived in Las Vegas before heading to Los Angeles, where they spoke with media, watched an NBA game, and even played Topgolf. But, as spectacular as life has been for the young performers, there has been a lot of sacrifice involved.

“There’s a lot of work to be done. Even in this film, there are a lot of emotions, a lot of blood, sweat, and tears,” said Pangilinan in an exclusive interview with FilAm media pioneer Jannelle So Perkins on So Jannelle TV, which airs on cable channels The Filipino Channel (TFC) and ANC, as well as local Southern California digital channel KNET 25.1. It’s “so exclusive,” in fact, that it was done in Pangilinan’s hotel suite.

Mariano, with whom Pangilinan co-starred in the 2021 film Love is Color Blind, mirrored Pangilinan’s sentiments.

That’s not to say they don’t have high expectations. The film, Star Cinema’s first in three years, was released on November 23 in 160 cinemas in the Philippines, and on November 25 in select theaters across the United States. Singapore and Dubai are also media stops.

The plot revolves around Manny (Pangilinan), a florist and company heir, and Ayef (Mariano), who works in Manny’s family’s convenience shop. The two agree to date each other, but only for a limited time.

Top 10 oldest schools in the Philippines

They were sequestered from friends and family while filming on a locked down set. Mariano was assigned to play a character who, according to Pangilinan, bears no similarity to her own nature, while Pangilinan learnt how to create terrariums.

The film emphasized the undeniable chemistry between the two actors, who had collaborated on several projects over the last three years. They attribute their success to their ability to be natural both on and off camera.

“We don’t give it much thought. We’re just ourselves, and what they portray is who we are. It’s like, what you see on camera and what you see off camera are both authentic,” Mariano explained.

Viewers of So Jannelle remarked on how well they get along, with one YouTube commentator calling the part “one of the best interviews” and added, “Walang fan service, really genuine lang lahat.” Another reviewer said she was “simply beaming the whole time. We have no explanation for their chemistry.”

What has DonBelle discovered about love?

The film raises uncomfortable questions about the extent individuals should go to for love, and DonBelle has their own answers. Mariano believes that while romance can be uncomfortable, it is only love if people are prepared to make modifications to allow it to be. Pangilinan feels that the inconveniences are a necessary part of the trip.

“I think you should see that the difficulties are worth it,” Pangilinan remarked. “I don’t think you should regard inconveniences as such because if you love the individual, you’re prepared to do those things.”