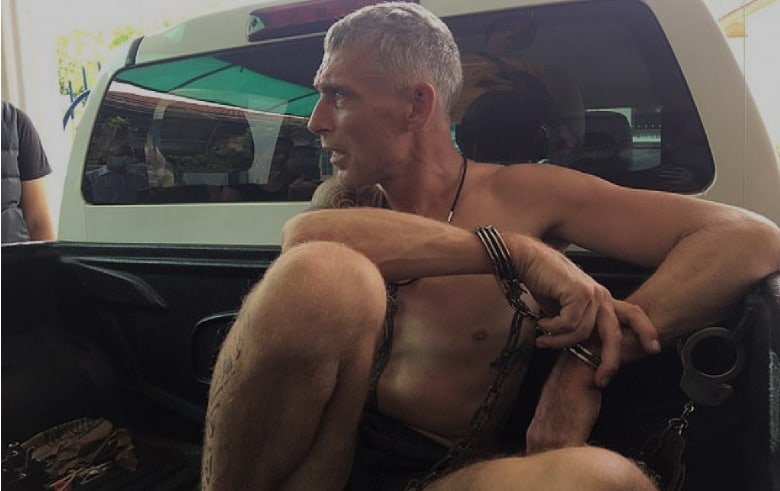 A 48 year old man from Northern Ireland, has been arrested in Pattaya, Thailand and charged with the murder of a Thai woman. The woman who is believed to be in her late thirties worked as a bar entertainer.

The Irishman allegedly beat the woman with a pool cue and then killed her with a machete. Upon responding to the call Pattaya Police found a broken pool cue and a 60 centimeter long machete covered in blood. The Suspect was identified as 48 year-old Neil Henry Elliott from Northern Ireland.

Inside the bathroom of his home Police found the body of the woman who was identified only as her nick name ‘Onn.’ According to Thai media on the morning of April 30th the pair reportedly started arguing. Elliott allegedly beat Onn with a pool cue until it snapped. He told police that when she resisted during the struggle, he stabbed her with a 60cm long machete.

Police officers picked up Elliott on a nearby street after he left the property and crashed a motorcycle. He reportedly told rescue workers that he had killed a woman. When police took him back to the house they found the dead woman in a bathroom. Elliott was immediately arrested for murder. He was handcuffed and hauled into a police pick-up truck before being driven away to the police station for questioning. Police chief Chiddecha Songhong said Onn was between 35 and 40 years old. He said: ”We found the victim in the bathroom. She had stab wounds on her neck and on her right wrist. ”The Northern Ireland man met her last night on Soi Buakhao and took her home. He said they both used drugs which lead to chaos and he attacked her until she was dead.” Pictures from the property this afternoon show the broken snooker queue on the blood-covered ground and the machete on the covered snooker table. A large Northern Ireland flag was hanging at the entrance to Neil’s single-storey property and police confirmed Neil was from the country. The police chief added: “Initially, we have not found his identification yet but he has admitted to the crime. “He will be remanded at the station for interrogation while the officers will search his house thoroughly again. Pattaya, on Thailand’s eastern seaboard, is best known for its notorious round-the-clock bars and is popular with British tourists and also foreign expats.