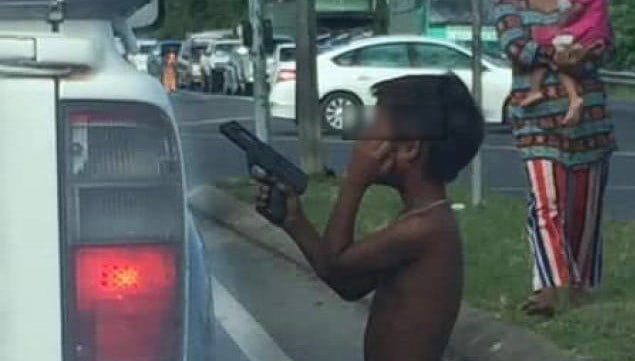 The boy, from the Palauh community, was picked up together with four other women and 10 children. Photos of the child holding a toy pistol and in handcuffs went viral on social media earlier today.

In another photo, the boy, seen begging for money while pointing the toy pistol at a motorist at Taman Aman Jaya.

Lahad Datu police chief ACP Nasri Mansor said the police responsible  was brought in and being questioned over the act.

“..this should not have happened and we regret it.“ he added.

Section 83A of the Child Act 2001 (Act 611) states that a child cannot be handcuffed following arrest unless the offence he is held for is a grave crime; Or the child forcibly resists arrest. On the other hand, Human Rights Commission of Malaysia (Suhakam) has asked MCMC to take down the picture of the child being handcuffed. They also urged the public to stop circulating the picture which could spread misinformation to others.