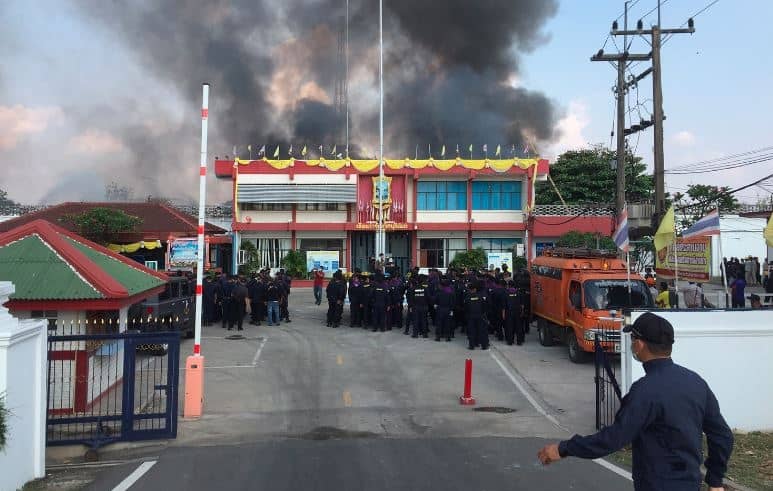 The last of the 11 inmates who broke out of the provincial prison during a riot on Sunday has been recaptured, police said. Of the 11 escapees, 10 were recaptured soon after, mostly from in front of the prison, leaving only Tanyapong Sinpoon, 26, on the run.

Police teams began a hunt for Tanyapong, who is from Ban Non Muang in tambon Phon Samran of Khu Muang district. Late on Monday morning, they were informed that a man believed to be Tanyapong had been seen in bushes near the ancient moat of Ban Non Muang.

A team of police began combing the area. They found a motorcycle and some clothes stolen from a dormitory near the prison, but did not find the escapee. About 1am on Tuesday, police were informed that villagers had spotted the hunted man strolling near Ban Phak Katya in tambon Phon Samran, near the Buri Ram-Phutthaisong road.

According to police, Tanyapong admitted he and other prisoners broke through the wall of the visiting room at the prison, slipped out through the hole and ran into a dormitory near the prison, where they stole clothes and a motorcycle before fleeing in different directions.

He hid in a pit in a quarry until after midnight before walking to a dormitory at Ban Khok Khao in tambon Samet to get a motorcycle he had left in the care of his younger sister. He then drove it to Ban Non Muang, his home village, abandoned the motorcycle and walked to Ban Phak Katya where he was recaptured. Along the way, he tried hiding himself in the bushes.

Tanyapong said that before the riot he heard a rumour that some hard-core inmates planned a jailbreak on Sunday. He was eating rice porridge when he noticed  a group of inmates gathering in a protest that later turned into a riot.