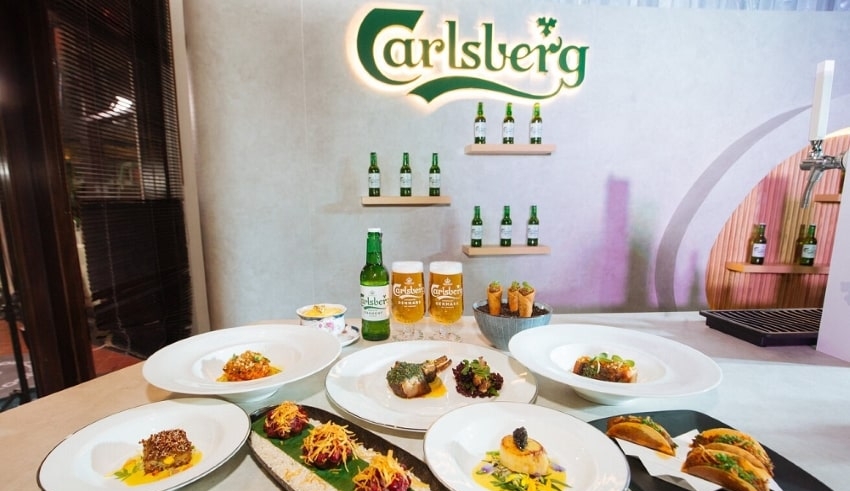 The Michelin-starred chef behind Singapore’s Thevar teamed with Carlsberg to create a meal that not only redefines Indian cuisine but also demonstrates the adaptability of beer as an element across the four courses.

The evening began with warm fluffy naan bread and a specially infused butter made with Carlsberg Smooth Draught at Senja at the Saujana Hotel Kuala Lumpur.

The warmth of the curry powder contrasted well with the saltiness of the whipped butter.

Beetroot Chaat, Maitake Mushroom Samosa, and Chettinad Chicken Taco were the next snacks to come.

It took 48 hours to prepare the pastry crust for the Beetroot Chaat, which was filled with beetroot and pomegranate cooked with Carlsberg Smooth Draught and served with a fermented buttermilk chutney.

Mano said that he is accustomed to using wine in his restaurant but not so much beer, and that the Carlsberg cooperation allowed him to explore and develop new flavors.

“Cooking with beer is not a novel idea,” Mano said.

“In Western nations, beer is used to tenderize, brine, and even improve the flavor of a variety of meals. “

When you’re eating a rich dinner, beer may help cut through the fat and give your dish a new layer of flavor.”

One-bite flavour bomb tacos were created to serve as an homage to the iconic Indian cuisine of Chettinad chicken, while the Vindaloo Jackfruit Taco served as a light and refreshing variation on the popular spicy Goan curry dish for vegetarians.