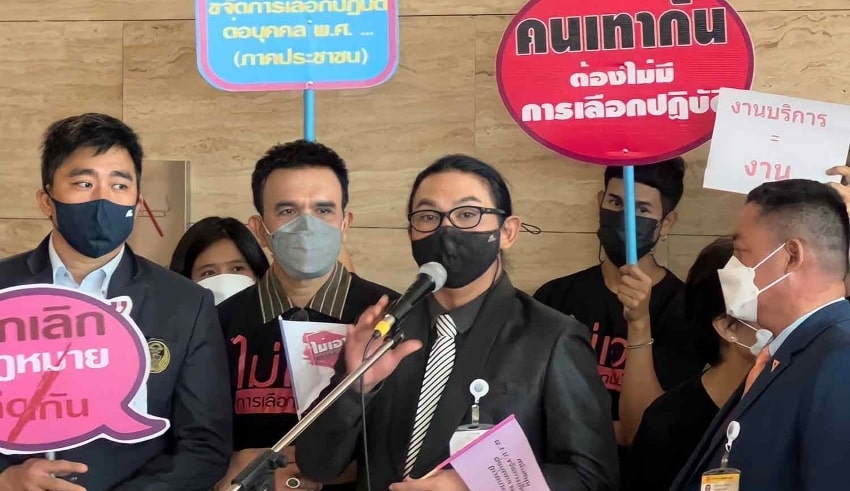 The people’s bill for the end of segregation, upheld by 12,116 marks, has been submitted for parliament's consideration, Move Forward party-list MP Thanyawat Kamolwongwat has shared.
(C) Bangkok Post

Thailand – The people’s bill for the end of segregation, upheld by 12,116 marks, has been submitted for parliament’s consideration, Move Forward party-list MP Thanyawat Kamolwongwat has shared.

In view of this, Mr Thanyawat, part of a functioning gathering of the House of Representatives for enactment on the end of segregation, on Wednesday was among representatves who presented individuals’ bill to  Parliamant President Chuan Leekpai.

They need it set on the House plan and pondered in a parliamentary interaction. He said the Move Forward Party is pushing for section of the bill for the equivalent treatment, everything being equal, and regard for human nobility.

They trust the bill, whenever passed into law, would tackle issues which have for some time been gathering and empower society to work on the standards of value and equity. Along with this, They need to concede that in Thai society actually individuals are being oppressed on account of their place of birth, sexual orientation or actual appearance.

Kerta Leces Concern Calls For Transparency and It Gains Attention

Mr Thanyawat said segregation was brought about by imbued perspectives or conduct solidly settled in the instruction framework and subsequently hard to change. This prompts individuals being dependent upon separation in work, instruction and admittance to administrations.

Individuals were impacted by separation in financial, social, social and numerous alternate ways. For instance, the instance of individuals from the Northeast being offended via web-based media. This was brought about by instilled perspectives towards northeastern individuals. As a MP, Mr Thanyawat shared that he felt the bill submitted to parliament could prompt the issue of segregation being settled deliberately.

Notwithstanding, he expected that this current individuals’ bill would be considered a monetary bill and be tossed out by Prime Minister Prayut Chan-o-cha. In this way, the Move Forward Party had likewise drafted its own bill on the end of separation for accommodation to parliament.