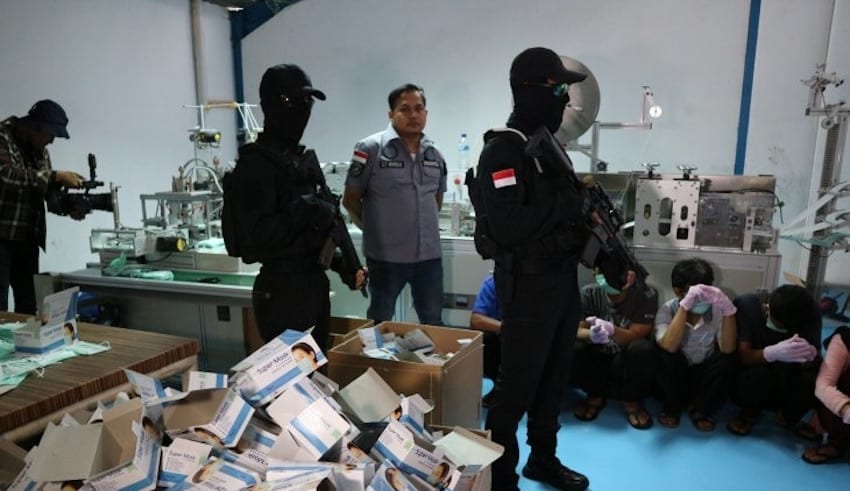 As many 10 workers were arrested after The Jakarta Metropolitan Police raided a warehouse that using for manufacturing fake medical masks, on Friday in Cilincing, North Jakarta.

However, the warehouse owner was not found according to Jakarta Metropolitan Police Spokesman Sen. Coms.Yusri Yunus told journalists.

“The warehouse owner remains a fugitive. The police are seeking him,” Yusri said.

Earlier, at that warehouse had received a permit for storing medical equipment. But, the facility was misused for manufacturing fake medical masks.

Yusri said, the preliminary results of the police investigation revealed that the masks were fake, having failed to meet Indonesia’s national standard requirements (SNI). From that fake medical masks production, the warehouse owner generated a daily turnover of up to Rp250 million. Those 10 workers who had been arrested told police investigators that each of them was paid Rp120,000 per day.

Also from the raid, police officers seized some 30,000 boxes of medical masks that were to be sold, machinery for manufacturing masks and raw materials.

For that actions done by the suspects, the police charged them with violating Law No.36/2009 on Health and Law No.7/2014 on Trade, which carry five-year-jail sentences and payment of fines up to Rp50 billion.

The demand for medical masks continues rising following global concerns over the spread of coronavirus (COVID-19).

As for now, the Indonesian Government reports there is no COVID-19 cases in the country so far.

Meanwhile, according to a report released by the United Nations’ World Health Organization on February 25, 2020 there are 81,109 confirmed COVID-19 cases. There was addition of 871 new cases including 459 new cases in 37 countries outside China and 412 new cases in China.