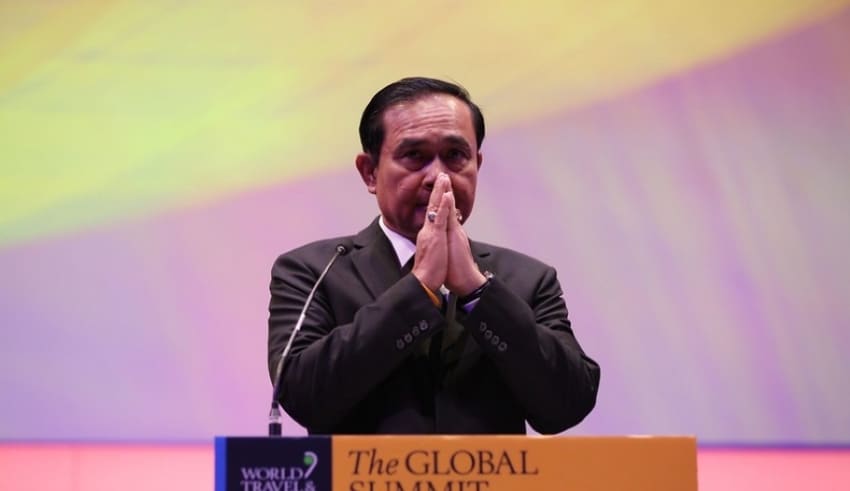 Prime Minister Prayut Chan-o-cha urged government coalition members on Tuesday to address their disagreements after a meeting of a special House committee reviewing Monday's 2021 budget bill collapsed in disarray due to lack of a quorum.
(C)flickr, World Travel & Tourism Council

Prime Minister Prayut Chan-o-cha urged government coalition members on Tuesday to address their disagreements after a meeting of a special House committee reviewing Monday’s 2021 budget bill collapsed in disarray due to lack of a quorum.

The July 20 meeting was brought to an unexpected end when a quorum count was suggested, leaving the space with only 19 Palang Pracharath Party (PPRP) MPs from the alliance parties and the opposition party. The meeting required a quorum of at least 24 participants.

Bhumjaithai MP for Uthai Thani Chada Thaiseth suggested a quorum count after it was reported that the coalition partners were unhappy with the leading PPRP committee leaders, who seemed to lose decision-making authority.

Gen Prayut emphasized that the leaders of the panel will patch it together to ensure sure the deliberation phase is done within the time limit. Some disruptions will have an impact on the government budget programme, he added.

Concerned parties have to work out their differences because if they can not, the cycle of budget creation would be disrupted, they have to speed up to stop disputes to stay up with the time limit. Under the statute, the House’s budget bill deliberation period must be concluded within 105 days of submitting the draft legislation to the Senate for review and approval.

Mr Chada blamed the PPRP on Tuesday for the failure of the July 20 conference, claiming that the ruling party has refused to establish a clear mechanism for the function of the committee. Although Mr Chada acknowledged that there was a dispute about the names of subcommittee chairmen, he maintained that it had little to do with the breakdown of the conference.

It has been confirmed that the PPRP wants to preside over all the seven committees. Worawat Ua-apinyakul, a Pheu Thai Party committee advisor, said the review mechanism would not allow much advancement because the panel never addressed whether expenditure reductions should be rendered even though state departments were called upon to explain their spending plans.

Asked about the row of the sub-committees chairmanship, he said the panels were yet to be formed, but cautioned that the PPRP would negotiate in order to prevent confrontation. He also blamed the PPRP for not taking the deliberation on the budget bill seriously, claiming the party did not submit people to the committee meeting with decision-making authority.

Varathep Rattanakorn, deputy chairman of the budget review panel that chaired the conference, rejected on Tuesday as false media claims that the PPRP wished to lead all seven subcommittees.