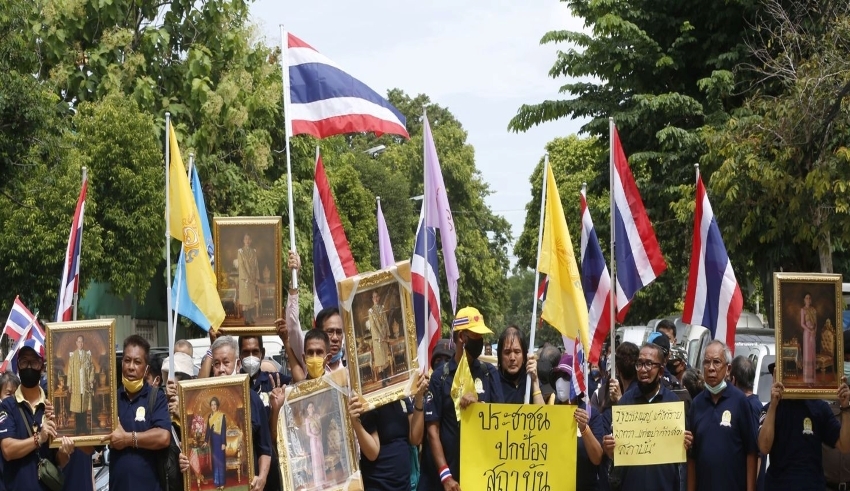 On Monday, dozens of supporters rallied before Parliament in support of the government of Gen Prayut Chan-o-cha.
(C) Bangkok Post

The rival protest groups gathered in and around Bangkok, raising the political temperature in the midst of almost regular anti-government student demonstrations nationwide, and stirring fears of returning to street violence.

On Monday, dozens of supporters rallied before Parliament in support of the government of Gen Prayut Chan-o-cha. Thousands later joined an anti-government demonstration in the outskirts of Bangkok at Thammasat University, the biggest such protest by students, challenging the government and conservative royalist establishment.

A former nationalist activist, Sumet Trakulwoonnoo, 46, announced a new pro-government party, the Coordination Center for Vocational Students in the Defense of National Institutions (CVPI), in a sign of a more organized opposition to the students.

A group of people are instigating young minors to come out and attack the military, government and also involve the monarchy, and that could lead to violence and the destruction of our governance system and culture, “Mr Sumet told reporters at the rally. The anti-government protesters have made rising numbers of veiled references to the monarchy, a highly sensitive subject, and one speaker has called for its abolition at a recent rally.

The students accused pro-government demonstrators of attempting to create confrontation that could lead to yet another military intervention. Gen Prayut said the government is creating a way for political groups to express their opinions, but he expressed concern about confrontation.

The authorities’ reaction to the anti-government protests was limited but two activists were arrested on Friday on charges of sedition and breaking restrictions to stop coronavirus spread, prompting more than 1,000 people to protest. On the other hand, Rachada Dhnadirek, a deputy spokeswoman for the government, denied blocking student activism.