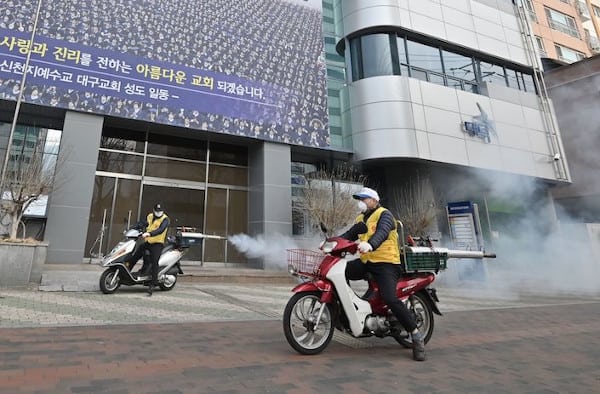 South Korean health authorities said a religious sect leader tested negative for coronavirus on Tuesday after being taken to a “drive-through” test site late Monday in the midst of criticism over how his church became the outbreak’s nucleus.

Lee Man-hee, who created the Shincheonji Church of Jesus and headed it, apologised on Monday and called the outbreak a “great calamity,” but declined to be examined by public authorities until a local governor tried to compel him to be tested.

A member of a church group, known as Patient 31, was the first of a surge of infections in recent weeks to hit the country, which has risen to 4,812 cases as of Tuesday. The suspect involvement of the church in the outbreak has sparked public anger.

According to Korea Centers for Disease Control and Prevention (KCDC), South Korea confirmed 600 new cases of coronavirus and 3 more deaths from the virus on Tuesday.

The outbreak is the largest outside of China, with most of them concentrated in the town of Daegu, where there is a branch of the Shincheonji church, and many of the cases after the 31st patient were related to the congregation.

According to Mayor Kim Jong-cheon of the city of Gwacheon, where the church headquarters is located, Lee was taken late on Monday to one of the many test sites set up around the country where people can stay in their vehicles while having samples taken.

The test result returned negative, a Gyeonggi province official said, asking not to be identified as he was not allowed to speak to the media.

Even as the church offered its 31,000 recognized members and “trainees” to be screened for the virus, the church and Lee themselves were under intense scrutiny and increasing outrage, and local politicians identified them for prosecution.

The church said it was a victim of the epidemic itself, and the public had “misunderstanding” of its existence.

After Lee spoke during a Monday news conference.