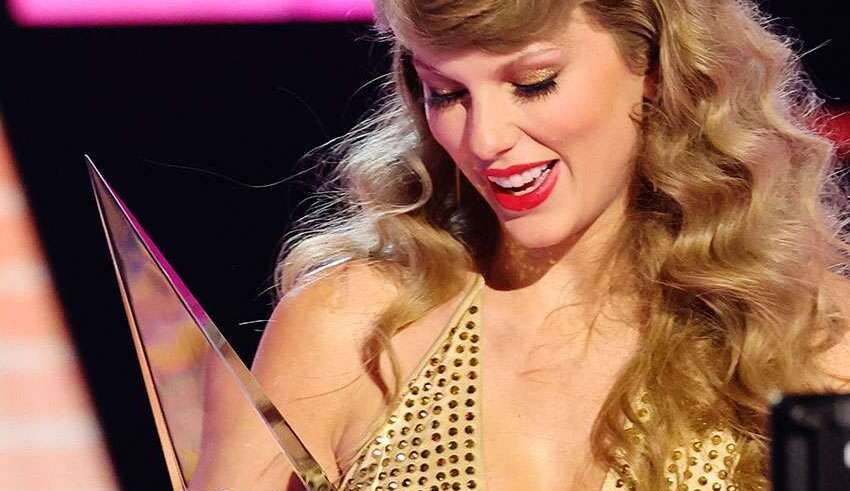 Pop star Taylor Swift has now won a total of forty awards from the AMA in her career, exceeding her previous record for the most victories at the ceremony.
(c) People

Sunday, November 20 at the American Music Awards, superstar singer and songwriter Taylor Swift won all six trophies for which she was nominated, including the evening’s top honor, artist of the year.

Swift now holds 40 AMA trophies, shattering her own record for the most victories at the world’s largest fan-voted awards show.

The “Anti-Hero” singer, dressed in a shimmering gold jumpsuit, stated that the support of her fans over the past few years has inspired her to make more music, which has made her happy.

Swift stated to an applauding audience during the Los Angeles ceremony, “I owe my pleasure primarily to my fans.” She said, “I cannot describe how incredible it is to me that I continue to do this and that you still care.”

Four original albums and two re-recordings have been issued by the 32-year-old in the past three years, which is more than her whole decade of work. After its release in October, songs from her most recent album, Midnights, dominated the Billboard singles chart.

Swift did not address the difficulties that disrupted Ticketmaster’s sales for her upcoming tour last week during her many acceptance speeches on Sunday, causing the corporation to apologize to her on Friday, November 18.

Swift also received awards for favorite pop album, country album, and video for her re-recording of the 2012 album Red. As a result of a conflict with her former record label, the singer has begun re-releasing older records.

Swift defeated Beyonce, Harry Styles, The Weeknd, Drake, Adele, and Bad Bunny, who entered the evening with the most nominations with eight, to win artist of the year. The Puerto Rican rapper and vocalist won two awards for “Un Verano Sin Ti”: best male Latin performer and favorite Latin album.

Pop singer Pink began the AMAs on roller skates while performing her uplifting song “Never Gonna Not Dance” She played “Hopelessly Devoted to You” as a memorial to “Grease” vocalist Olivia Newton-John, who passed away in August.

Lionel Richie, known for “All Night Long” and other singles from the 1980s, was honored with the AMA’s Icon Award. On dueling pianos, Stevie Wonder and Charlie Puth performed a medley of Richie classics.

The host and comedian Wayne Brady rapped during his opening monologue. In reference to Will Smith’s infamous attack on Chris Rock at the Oscars, Brady remarked, “Nobody’s getting slapped today.”