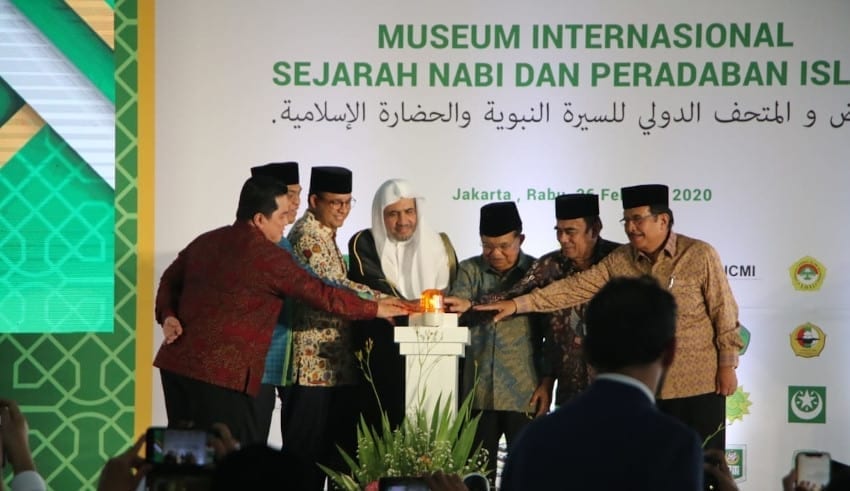 DKI Jakarta Governor Anies Rasyid Baswedan along with Chairman of the Indonesian Mosque Council (DMI) Jusuf Kalla inaugurated the construction of the International Museum of the History of the Prophet Muhammad and Islamic Civilization, in East Ancol Beach, North Jakarta, Wednesday (26/2).

This will be the International Museum of the History of the Prophet Muhammad and the first and largest Islamic Civilization in the world which is located outside of Saudi Arabia.

The inauguration was also attended by Minister of Religion Fachrul Razi, Minister of BUMN Erick Thohir, and Minister of Agrarian Affairs and Spatial Planning Sofyan Djalil. They both pressed the siren sign the construction of the Prophet Muhammad’s History Museum and Islamic Civilization officially began.

In his remarks, Anies said the construction of this museum was the result of collaboration from the Indonesian Embassy in the Islamic World League and the As-Salam Waqf Foundation in Saudi Arabia and the DKI Jakarta Provincial Government.

Anies hopes that the museum will become Jakarta’s new icon. “Later, God willing, when this is finished, in this Ancol area there will be two icons appearing together. On the west side of the mosque, which is built above the sea, the Floating Mosque, and on the east side is the Rasulullah Museum. Later, God willing, there will be more than 100 “Rasulullah’s food menu will be prepared at this place,” Anies said.

He also hopes that by choosing Jakarta as the location of this museum, it will bring blessings to the Capital. “God gave His destiny, (this museum) was built on the coast of Jakarta, where the presence of Muslims (in Jakarta) began in this area,” he said.

Ancol was chosen as the location of the museum construction because this place has long been known as a famous tourist spot. Community access to visit the museum is also considered easier.

“We hope that with this museum, it will become a place for people to come, not only from Indonesia, but also the Southeast Asian region because it is close to airport access,” Anies said.

Anies added that the museum can become a center for research and study of Islamic civilization with international class facilities. So as to attract the interest of the younger generation.

“The development plan will be completed in 18 months, so God willing, we will be able to see the results in the middle of next year,” said Anies.