The Asian Affairs > Latest News > Indonesia > This is the KPK ranking in the Indo Barometer Survey: Public trust decreasing? 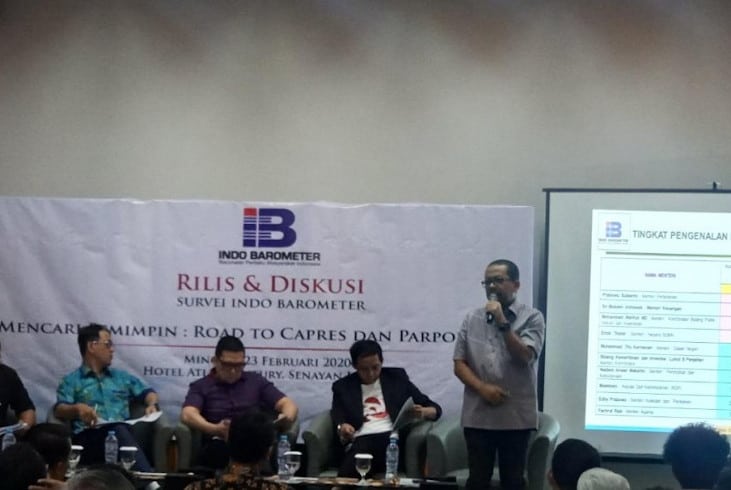 Indo Barometer Executive Director, Muhammad Qodari in a Press Conference in Jakarta, Sunday (02/23/2020) stated that the level of public trust in the Corruption Eradication Commission (KPK) institution has decreased.

Decreasing the level of trust is not too significant, but it’s just enough to make Qodari surprised, because the KPK is usually ranked in the top three with the Indonesian National Armed Forces (TNI) and the President of Indonesia.

“There are four state institutions that have a high level of public trust namely the TNI (94 percent), the President of Indonesia (89.7 percent), religious organizations such as NU and Muhammadiyah (86.8 percent), and the KPK (81.8 percent),” he said.

That means, the KPK ranks fourth in the Indo Barometer survey. According to Qodari, the percentage of the KPK is still relatively high, but its ranking has declined.

The Indo Barometer survey involving 1,200 respondents from 34 provinces was conducted on 9-15 January 2020. With a margin of error the survey reached ± 2.83 percent at a 95 percent confidence level.

The KPK won 81.8 percent trust and 13.9 percent was not trusted by respondents. On the other hand, another 4.2 percent did not answer.

Compared to the Indo Barometer survey in 2017, the KPK is still in the top three with 83 percent confidence level.

Looking at the track record of the current KPK Chairperson, Firli Bahuri who was once convicted in one of the stages of an ethical trial at the KPK. This is what according to Adjie Alfaraby, senior LSI researcher Denny JA, which caused a decrease in the level of public confidence in the KPK earlier this year.