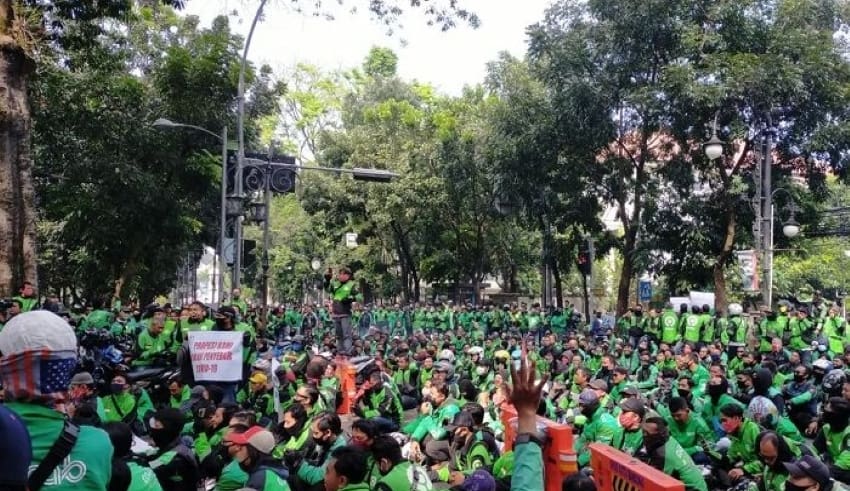 Quoted from CNNIndonesia.com, the masses began to gather at Jalan Wastukencana around 09.00 WIB. They surged up to the entrance to the City Hall.

The masses were seen to carry banners and attributes. They carried banners containing the message, ‘No Go-Ride No Happy’ and satire in the poster ‘Our Profession Is Not Covid-19 Spreaders’.

The action mass representative, Prima Anandapriya said, the mass consisted of riders of various applications. They conveyed these demands because up to now they still cannot carry passengers.

“About the activation (app) until now we have not been permitted, we have not been able to open passenger transport services. We demand clarity when the mayor signs and will be officially approved,” he said in front of the Bandung City Hall, Jalan Merdeka, Bandung City, Monday.

According to him, there were about 5,000 people who took part in the action from various regions. The drivers, he said, have been very economically affected since the Covid-19 pandemic.

Prima said that there were two demands filed with the Bandung city government. The first request is the activation of the motor taxi service in the Go-Ride and Grab-Bike applications. The second, about the release of the Covid-19 rapid test for the drivers.

“Immediately activation of motor taxi service in applications throughout Bandung. Until now we have not been permitted. We demand that the mayor sign it,” Prima told reporters.

He said the applicator had sent a letter today to the Bandung City Government. “Hopefully with the letter from the applicator can be signed by mayor. Then, Gojek and Grab can activate it when it is finished,” he said.

The masses also demanded the release of the Covid-19 rapid test, which was previously the requirement that allowing drivers to operate. According to him, this must be balanced with rapid tests on passengers.

The DOJB rejected the requirement for ojol drivers to take a rapid test before being allowed to carry passengers. The reason, Prima says, this requirement is also not implemented for other transport drivers.

“Why only online motorcycle taxis are tested, why are bus drivers not tested, both are transportation,” he said.

He also said that he would continue to take action if the Bandung City Government did not immediately realize the demands of the mass action. This had to be done because the economic impact was felt by drivers if they could not carry passengers.

During the Large-scale Social Restrictions (PSBB) until now entering the New Habit Adaptation (AKB), he said the income of drivers were very small. In fact, some of them have no income at all.

As is known, the City Government of Bandung requires ojol drivers to have Covid-19 health certificate as a requirement to be able to carry passengers.

“We ask this partner to have a free Covid-19 certificate. The certificate is certainly issued by the authorized institution, in this case, is a health institution,” said Regional Secretary of Bandung City Ema Sumarna at Bandung City Hall, Friday, July 3.