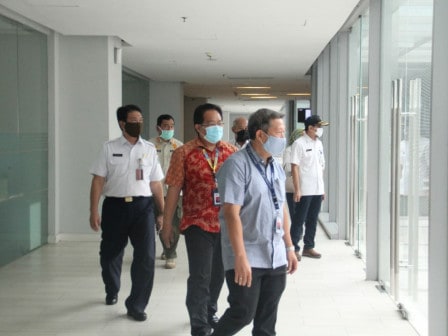 Urge and reaction to commuter lines suspension, inspection to companies during PSBB
(C)BeritJakarta

Commuter lines in and around Jakarta are urged to be suspended while the capital implements large-scale social restrictions (PSBB) to control coronavirus spread. Jakarta Governor Anies Baswedan has requested ad interim Transportation Minister Luhut Binsar Pandjaitan regarding this.

“Two days ago, I proposed the suspension of commuter lines to the Transportation Minister while the PSBB is in place,” Anies said at a meeting with the House of Representatives’ COVID-19 control supervisory team in Jakarta on Thursday, April 17.

According to him,  Transportation Ministry is deliberating on the proposal. The ministry also will likely approve it after social assistance has been distributed among coronavirus affected-people.

Anies said the city administration has begun reducing the number of operating hours and passengers for public transport vehicles, also controlling  them at the entrance of bus stops and stations.

TransJakarta that carries 550 thousand to one million passengers per day in normal conditions, currently has decreased.

The number of passengers using TransJakarta has dropped significantly to 91 thousand on Wednesday (April 15) from 103 thousand on April 1, he added.

Meanwhile, The Indonesian Transportation Society (MTI) opined that recommendations related to the suspension of commuter line or KRL operation during the PSBB must be in consideration of the fate of outsourced workers.

Djoko asserted, that the number of commuters that remained high despite the enforcement of the strict physical distancing was not the fault of the train operator.

According to him, if the train stops operating, it will not beset the state. Because its operational budget has been allocated in the form of the public service obligation (PSO). This is similar to Transjakarta buses, MRT Jakarta, and LRT Jakarta.

Basically, Djoko said, the state railway operator PT KCI will definitely be ready to abide by the central government regulations or orders set by regional administrations that enforce PSBB. But it must be decided together by Jakarta Greater Area or Jabodetabek, instead of one region only, he said.

“If many people still use KRL, don’t blame the operator. But inspections to companies that are still operating [normally] during the restriction period must be carried out,” Djoko added.

On the other hand, number of companies are being inspected during the city’s restriction. The Jakarta Labor, Transmigration, and Energy Agency conducted an inspection against 106 companies that continues to operate during the PSBB period on Thursday, April 16, 2020.

“The inspection was inline with the PSBB implementation, carried out against 106 companies and workplaces,” said the head of the agency Andri Yansyah on Thursday, April 16, 2020.

From the inspection, 85 companies received warnings while 20 offices were temporarily shut down. Andri urged offices that are not exempted in the PSBB to halt operations, or the Jakarta Administration will impose harsh punishments against corporations that violate the PSBB policy. The violators could get warnings up to permanent business permit revocation.

Then, for companies that are allowed to operate following the inspection, Andri added, they should implement the recommended health and safety measures.