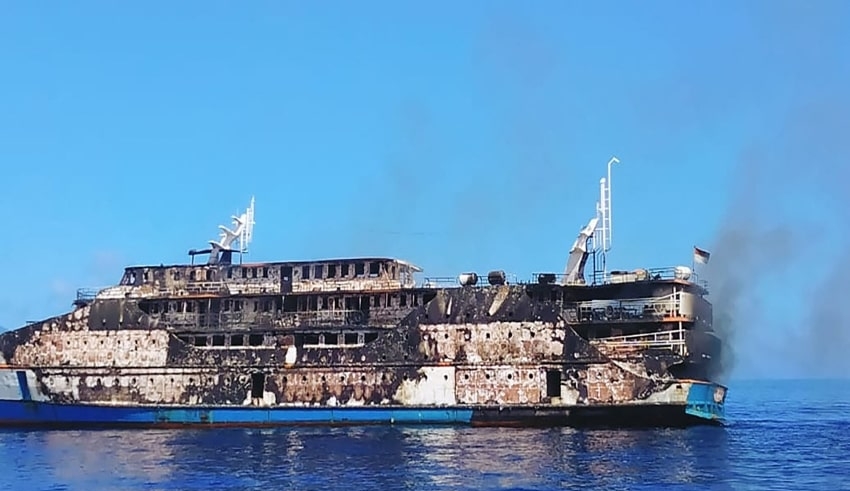 An official has given a statement today that the rescue teams are currently doing search operations to look for one missing person after having all other passengers evacuated from a ferry that caught fire in Indonesia.
(C) globaltimes

An official has given a statement today that the rescue teams are currently doing search operations to look for one missing person after having all other passengers evacuated from a ferry that caught fire in Indonesia. The ferry involved which is the KM Karya Indah was on its way to Sanana, a remote port in the northeast of the Indonesian archipelago when the fire incident happened. In a short time after the ferry departed, it got engulfed in flames which has forced the passengers as well as the crew to jump into the sea in order to save their lives. No casualties have been reported.

According to Muhammad Arafah who is the head of the local search and rescue team, there were a total of 275 people on board and 274 individuals had been safely evacuated. However, he said that a 43-year-old man is still nowhere to be found and that the search teams are still looking for him. He also mentioned at least 35 passengers were actually children. Dozens of rescuers are still scouring the area in efforts to look for the one missing person.

A Zero Waste Adventure is being Strengthened Indonesia

The Green Recovery in Indonesia is Immensely Possible

The Improvement of Sharia Economy Gets Stronger

The images shared by the search and rescue agency showed the ferry being covered with thick and dark smoke as passengers wearing life jackets were being rescued by the rafts. The local police have detained more than a dozen of crew members in order to question them as an investigation effort to determine the cause of the fire. Maritime accidents like this are usual in Indonesia because the safety standards were poorly set in place. However, passenger ferries have been widely used for the purpose of transportation in the archipelago of some 17,000 islands.

In 2019, an accident involving an overloaded ferry occurred where 21 people lost their lives as the ferry sank in the rough seas off Java’s north coast Whereas, in 2018, an Indonesian ferry sank into the depths of one of the world’s deepest lakes on Sumatra Island where about 160 people died because of drowning while an estimate of 300 people were said to have drowned back in 2009 when a ferry also sank between Sulawesi and Borneo.