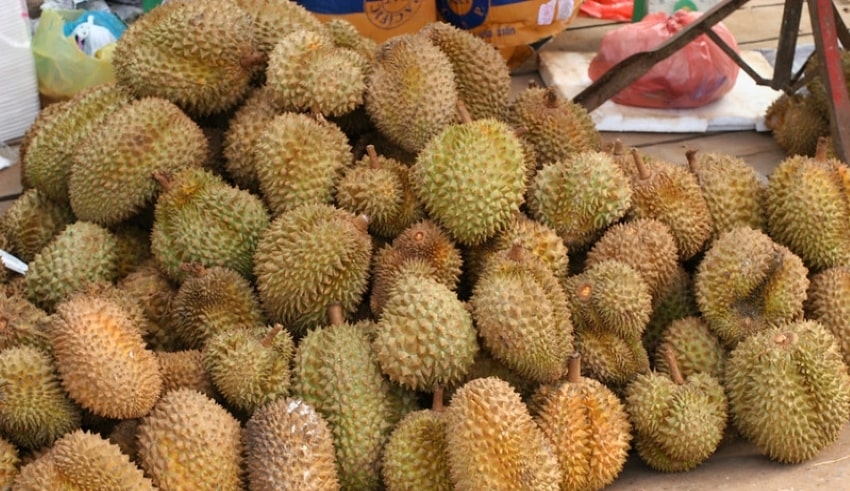 Malaysia, being one of the leading producers of durians, has enough of them, particularly during the durian season
(C) : Flickr, Mai Le

Malaysia – Many people love and dislike the King of Fruits, as it is affectionately called. Some people find the strong fragrance of its custard-like flesh overpowering, while others find it enticing enough to spend hundreds of Ringgit on it. Malaysia, being one of the leading producers of durians, has enough of them, particularly during the durian season. So, if you didn’t know, there are six different varieties of durian available throughout the durian season in Malaysia, including the Musang King, D24, Red Prawn, and more.

In Malaysia, there are six different types of durians:

Among durian fans, it is known as the King of the King of Fruits, Cat Mountain King, Rajah Kunyit, and Mao Shan Wang. It has a buttery, creamy texture that is rich and bitter-tasting, and the flavor remains long after you’ve licked your fingers clean.

The Musang King durian is also often used in cendols, making it ideal for a hot day when you want a sweet, bitter, and chilly combination.

The D24 durian, also known as Durian Sultan, is one of Malaysia’s most popular, generally being a milder and less expensive counterpart of the Musang King. It features a golden-yellow flesh and a noticeable green outer shell. When bitten, high-quality D24 durians have a dry, hard flesh with the durian’s trademark creamy bitter flavor.

Musang King durians have a dark green tan that changes coloration as it approaches the tip of its thorns, but the D24 has a bright green color.

The Musang King’s thorns are scattered and pyramidal, but the D24’s are grouped.

The Red prawn durian, also known as Hong Xia and Ang Hay in Mandarin, gets its name from its distinctive yellow-reddish flesh that looks like prawn.

The Red Prawn durian has a brownish color and a shell with small thorns spread across it. Due to its sweet yet sticky flesh that is not as overbearing as more pungent smelling durians, it is a fantastic entry level durian.

When it comes to XO durians, the stronger the aroma, the better the fruit. Don’t be deceived by its pale appearance; the XO durian has a strong alcoholic and fermented flavor that develops as it ripens. It has such a smooth feel that it will softly drop off your fingertips

The Golden Pheonix durian, also known as the Jin Feng or D198, has thin spikey thorns that some claim resemble those of a phoenix.

It is generally modest in size, with a thin husk that might seem unappealing, but within lays a huge bright yellow flash and thick flesh, comparable to the XO durian – a great value-for-money in the opinion of many.

It has a strong bitter and alcoholic flavor as well.

Due to its small spherical seed, the Black Pearl durian is more like an actual pearl than a cinematic allusion to the Pirates of the Caribbean.

It’s called Hei Zhen Zhu in Mandarin, and although it’s smaller than the normal durian fruit, it makes up for it with a large number of light, yellowish seeds that are smooth and creamy in texture.

It has a little bitter flavor that is ideal for individuals who aren’t fond of strong, overpowering durians.