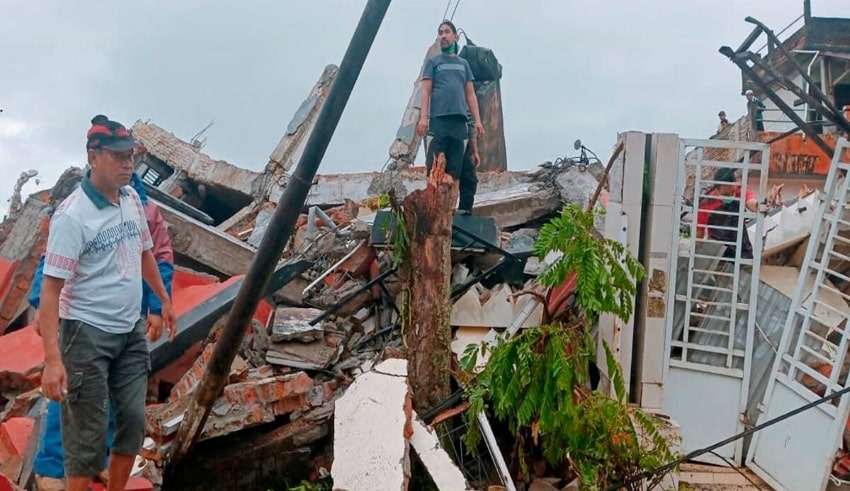 There are more than 820 people who were injured and over 27,800 left their homes after the 6.2-magnitude quake which was stated by BNPB spokesman Raditya Jati.
(C) indianexpress

It’s shocking how the natural disaster gave huge destruction in the nation of Indonesia. In view of this, there are more than 820 people who were injured and over 27,800 left their homes after the 6.2-magnitude quake which was stated by BNPB spokesman Raditya Jati. Some sought refuge in the mountains, while others went to cramped evacuation centers.

In many areas of the country, police and military officers have been mobilized to crack down on looting that’s why an emergency response status has also been set in place for two weeks wherein they expected to support relief operations.

However, In the West Sulawesi town of Mamuju, where a hospital was demolished and a shopping centre lay in rubble, rescuers have been hauling corpses from under collapsing buildings since last Friday.

It’s alarming that there was no number provided by the government for how many people were saved, and the death toll from the quake could also increase. Along with this, Ms Dwikorita Karnawati, head of the Meteorological, Climatological and Geophysical Agency of Indonesia shared that another earthquake could theoretically cause a tsunami in the area which made it more intense and chaotic to think.

Morever, straddling the so-called Pacific Ring of Fire, earthquakes frequently strike Indonesia. Looking back, the city of Palu in Sulawesi was hit by a catastrophic 6.2-magnitude earthquake and ensuing tsunami in 2018, killing thousands.

Only two weeks into the new year, the fourth-most populated nation in the world is dealing with many catastrophes. At least five people were killed by flooding in North Sulawesi and South Kalimantan provinces this month, while at least 29 were killed by landslides in West Java province and a Sriwijaya Air jet crashed into the Java Sea on Jan 9th carrying 62 passengers on board. Along with this is the Mount Semeru in East Java exploded late last Saturday, but no reports of injuries or evacuations have been recorded. For this reason, Ms Dwikorita gave a caution that in the coming weeks, extreme weather and other “multi-dangers” of hydrometeorology are expected.