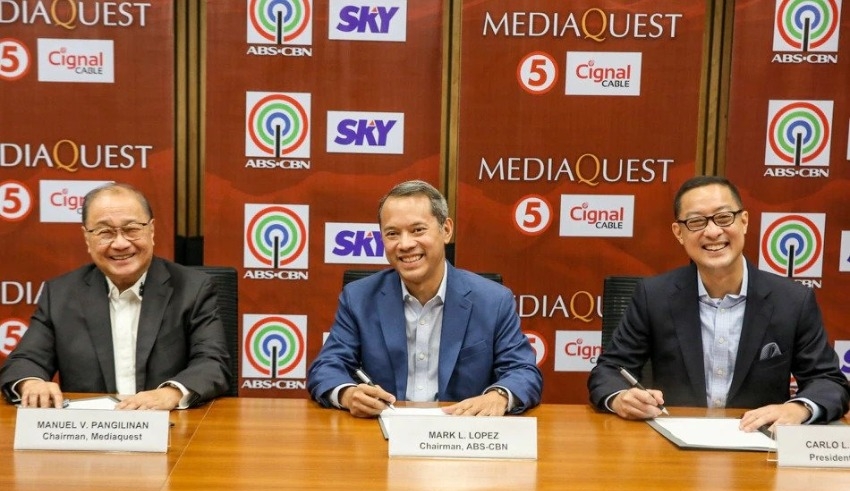 ABS-CBN said in a statement to the Philippine Stock Exchange that it will be purchasing close to 6.5 million primary common shares of TV5 for P2.16 billion.
(c) ABS-CBN news

After more than a year of discussions, media powerhouses ABS-CBN and TV5 have put their signatures on an investment transaction with multiple billions of pesos, which will effectively combine the content and resources of both organizations.

On Thursday, August 11, ABS-CBN said in a statement to the Philippine Stock Exchange that it will be purchasing close to 6.5 million primary common shares of TV5 for P2.16 billion. This represents 34.99% of TV5’s total voting and outstanding capital stock.

Following the successful completion of this subscription, the equity held by MediaQuest, which operates and owns TV5, will be lowered to a level that corresponds to 64.79% of the voting and outstanding capital stock. TV5 will continue to be controlled by MediaQuest as its majority shareholder.

A convertible note agreement will also be executed between ABS-CBN and TV5, according to which the former will invest in a convertible note issued by the latter with a face value of P1.8 billion and the latter will issue the note. This will provide ABS-CBN with the opportunity to acquire more shares of TV5 eight years after the issuing of the convertible note; however, the company will only be able to raise its stock in TV5 to a maximum of 49.92% if it exercises this option.

According to a statement made by ABS-CBN, “the proceeds from the subscription in the primary common shares and the convertible note in the total amount of P4 billion will fund the capital expenditures and operating expenses of TV5 in the pursuit of the enhancements of its content and programming and the public service offerings.”

“We are excited with this cooperation as we see the chance to assist TV5 develop and strengthen its free to air network,” said Mark Lopez, chairman of ABS-CBN. “We see the opportunity to help TV5 grow and strengthen its free to air network.” This provides an excellent opportunity for ABS to gain synergies in production content and talent management, as well as to maximize the delivery of our content.

Due to the fact that Congress did not grant ABS-CBN a franchise during the Duterte administration, both corporations have decided to use TV5 as their broadcast platform.

Before this transaction, ABS-CBN, which is owned by Lopez, would make block time leasing arrangements with TV5, which is run by Pangilinan, in order to broadcast its most popular series.

The Queen of Philippine Movies, Susan Roces Dies at 80

In addition to the transaction involving ABS-CBN and TV5, Pangilinan’s Cignal Cable Corporation has agreed to pay the Lopez family P2.86 billion to purchase a 38.88% share in Sky Cable Corporation.

At the same time that the companies executed the sale and purchase agreement, they also executed a debt instruments agreement. Under the terms of this agreement, Sky Vision Corporation, which is a stakeholder in SkyCable, agreed to issue an exchangeable debt instrument to Cignal Cable with a face value of 4.39 billion pesos. The agreement was executed simultaneously with the sale and purchase agreement. Eight years after the debt instrument’s issuance, Cignal Cable has the opportunity to acquire additional SkyCable shares that are equivalent to 61.12% of SkyCable’s outstanding capital stock. This option is granted by the loan instrument.

Cignal Cable will also acquire a convertible note issued by SkyCable with a face value of P250 million. This note is convertible into primary shares of SkyCable, which together account for approximately 1.84% of the company’s outstanding capital stock, as per the terms of the debt instruments agreement.

According to PLDT’s statement, “The investment of Cignal Cable in Sky Cable is expected to benefit the latter’s existing customer base of more than 300,000 cable customers and close to 350,000 internet users as of the end of June 2022.”

SkyCable is estimated to be worth up to P18 billion despite having only been established in 1990.

In the year 2020, Manny Pangilinan made an offer to purchase SkyCable; however, he ultimately decided to withdraw his offer due to concerns that the antitrust agency would reject the contract.

Pangilinan is the chairman of the multinational telecommunications company PLDT, which owns the direct-to-home satellite television service Cignal TV and is a competitor to SkyCable’s Sky Direct. SkyCable also provides internet service via fiber optics.

ABS-CBN reported a loss of P1.4 billion for the first three months of 2022, but its revenues increased by 18.6% to reach P4.65 billion. This growth was mostly driven by political commercials shown during the May elections.

The Kapamilya network had losses totaling P5.67 billion for the entirety year 2021, which was an improvement from the P13.53 billion recorded in 2020.

Because SkyCable was unable to continue providing direct-to-home (DTH) service after the expiration of its franchise, the firm maintained its concentration on expanding the number of people who subscribe to its broadband service. Despite not offering DTH services during the first fiscal quarter, SkyCable was nonetheless able to generate revenues totaling P2.1 billion.

SkyCable’s revenue reached a total of P8.4 billion for the entire year of 2021.

Since the entrepreneur Pangilinan bought TV5 from Antonio Cojuangco in 2010, when the latter was still the owner, the company has not yet turned a profit.
Pangilinan was quoted in the Philippine Star in 2021 as saying that “it is doing nicely” and that the company might take profits by 2024.