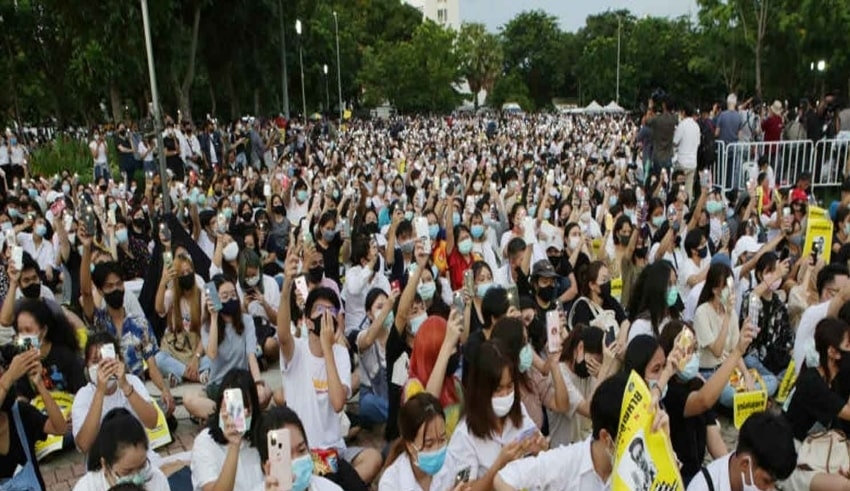 Pro-democracy activists called on educational institutions to allow on-campus protests as pressure increases on them to prohibit “risky” political activities.In Fact, Pita Limjaroenrat, leader of the opposition Move Forward Party, posted that safe spaces were dwindling for students to express their views and that young people “should be permitted to carry out activities there.”

His remark came after the University of Thammasat pledged to prevent a recurrence of Monday’s rally at its Rangsit campus where the protesters’ remarks breached Section 112 of Criminal Code. The students also extended their demand to include reform of the highest institution in the country, raising fears that it would cause violent confrontations between the royalist movement and its opponents.

Mr Pita said that confrontations would not take place and that student protest would not culminate in a violent crackdown like the incident of 6 Oct 1976 if those in power controlled themselves and did not resort to the crackdown.

He described the expanded demand of the students as a “uncomfortable fact”.

In view of this, Chaturon Chaisang, the defunct Thai Raksa Chart (TRC) party ‘s former chief strategist, wrote on Facebook that the public would warn authorities that the use of violence will only intensify the political crisis.

He said the government would listen to the students and facilitate talks, while pointing out that the government and the House of Representatives are on the right track by agreeing to a move to rewrite the charter.

Nevertheless, they must be serious in the drive to rewrite the charter and allow timely modification of the charter. Meanwhile, the student organization of Thammasat University insisted that Monday’s rally was not against the law, and that it had good intentions towards the government. It is also said that university executives should not bow to public pressure, and should adhere to democratic principles.