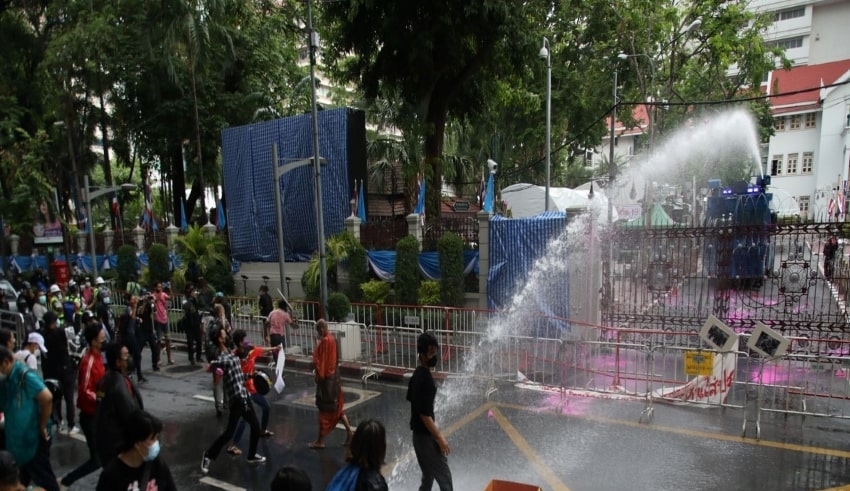 Hostile to government nonconformists assembled at Ratchaprasong crossing point and attempted to pelt pink color at the close by Royal Thai Police Office.

In view of this, Around 100 dissenters of the Thalu Fa bunch displayed at Ratchaprasong convergence at about 3.30pm to request that Prime Minister Prayut Chan-o-cha leave. In fact, At 4.12pm they walked to the close by Royal Thai Police Office on Rama I Road and began to toss packs of pink color at the police head office at 4.20pm. Police there were totally ready since the signage of the central command had been very much covered before they showed up.

The police were the objective as the dissenters accepted they had responded savagely during past crackdowns. Three young men aged 14-16, were shot by live rounds during the conflict at Din Daeng on Monday night. The 15-year-old was in basic condition. Police denied having utilized live adjusts on dissenters.

The police central command was protected by revolt police who likewise had water gun hardware, which was utilized to stop them. Inevitably, the dissenters finished the convention there.

Consequently, At 5pm, revolt police were assembled to ensure Din Daeng police headquarters, a couple of moments before demonstrators turned up at Din Daeng crossing point, the conflict site since Saturday. Huge fireworks were tossed there.

It was muddled whether they were similar gathering of nonconformists who had mobilized at Ratchaprasong before in the day. At 6.45pm, revolt police held onto control of Din Daeng crossing point and demonstrators withdrew. Firecrackers detonated and police reacted with nerve gas.

In addition to this, At 6.50pm, demonstrators, a significant number of whom rode cruisers, refocused at Din Daeng pads. Their number developed at 8.10pm. They tossed fireworks and guided laser radiates at the police to make it hard for them focus when terminating nerve gas.