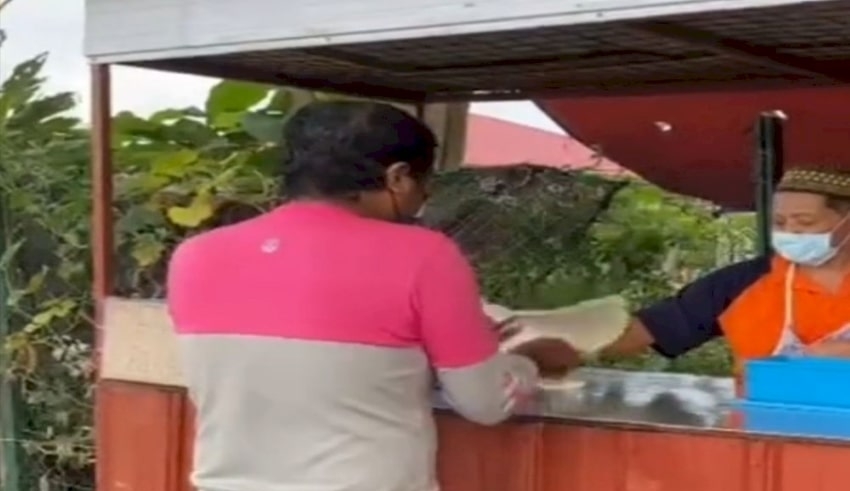 The Covid-19 pandemic has increased demand for online food delivery.

While the government has permitted fully vaccinated people to eat in, many remain reluctant due to the large number of community cases reported daily.

Stalls and restaurants continue to be overwhelmed with ood orders, leaving operators of eateries at times unable to cope.

Khairul Hamizan Mustafa of Penang Foodpanda ended up assisting a stall operator in making ‘roti canai’ for customers while awaiting his order, in order to expedite the process.

The rider’s footage, which was captured by a coworker, quickly went popular on the internet, garnering 1.1 million views and 139.9K likes on TikTok.

Numerous TikTok users expressed gratitude to Hamizan for assisting the elderly guy who was seen diligently working on the orders.

According to one user, Foodpanda is adaptable. Occasionally, they even assist in catching the thieves.

“Malaysia’s Foodpanda is fantastic. It might be the cops, a chef, or anything else,” another said.

The 24-year-old rider, who arrived at the store in Kubang Terong, Tasik Gelugor, Penang at 10.30am, said that there were four other riders waiting for their orders to be delivered, and he was the fifth rider with 15 ‘roti canai’ orders, Mstar reported.

The report says, the elderly proprietor had joined Foodpanda and was having difficulty keeping up with the number of orders.

Recognizing this, Hamizan rolled up his sleeves and began creating ‘roti canai’ in preparation for the customer’s order to be sent.

The young guy, a resident of Pokok Machang village, has been producing ‘roti canai’ since he was 12, while his parents continue to operate a roti canai company in Pokok Sena, Kepala Batas.

Hamizan said that he previously assisted his parents throughout his school vacations and weekends till he graduated. “My parents still sell roti canai; they still have a booth in Pokok Sena Kepala Batas. My mother taught me how to make roti canai while I was in Standard Six. “During my school vacations, particularly on weekends, I used to assist my parents with their business.”